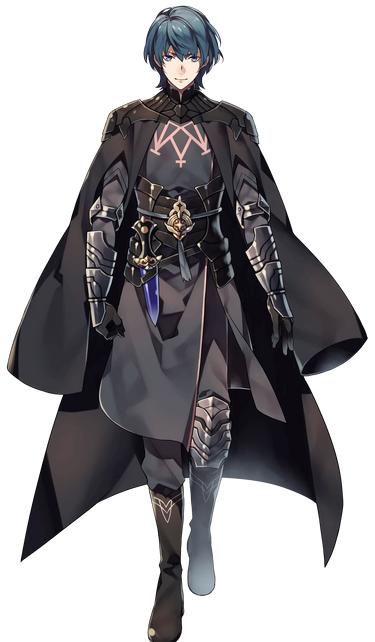 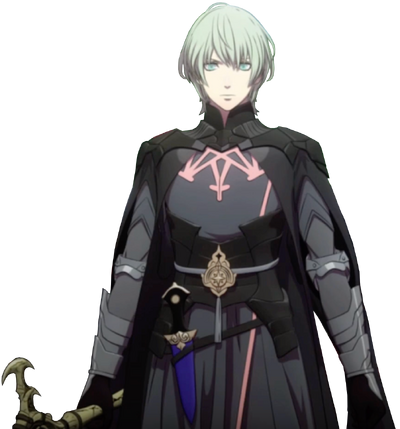 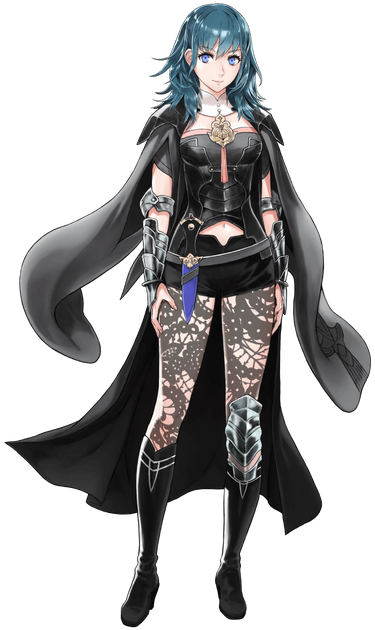 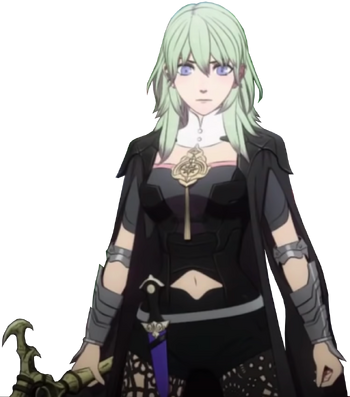 Byleth Eisner is the main protagonist of Fire Emblem: Three Houses. He was born of Jeralt and Sitri in Imperial Year 1159. He is a member of a mercenary troop led by their father Jeralt, and spent their early childhood wandering the continent of Fódlan with him. After an "unexpected incident" reveals an unknown power hidden within, they travel to the Officers Academy at the Garreg Mach Monastery and are offered a position as a teacher. They also begin to have visions of a strange girl named Sothis who decides to guide them.

After being trapped in a dark void by Solon, he and Sothis are left helpless. In order to escape, Sothis volunteers to merge with Byleth, granting them the full extent of her powers, but at the cost of her consciousness disappearing from them. After merging with Sothis, Byleth becomes the new Progenitor God and awakens the true power of the Sword of the Creator.

Powers and Abilities: Superhuman Physical Characteristics, Acrobatics, Weapon Mastery (Their primary weapon is a Sword, but they are capable of expertly wielding other weapons), Martial Arts (Has proficiency in brawling weapons), Magic, Fire Manipulation (Via the Sword of the Creator and Magic), Electricity Manipulation (Via the Sword of the Creator and Magic), Holy Manipulation (Via Magic), Light Manipulation (Via Magic), Healing, Accelerated Development, Statistics Amplification, Damage Boost (Depending on the Magic or Combat Art, they can deal extra damage to certain types of enemies), Damage Reduction, Empowerment (Via Defiant Str and Sacred Power), Limited Durability Negation against dragons (The Sword of the Creator bypasses dragon's defenses), Limited Transmutation (If someone try to steal and use their Hero Relic without the correspondence Crest, they will be turned into a Demonic Beast), Time Manipulation (Via Divine Pulse) | Same as before, Longevity, Portal Creation (Able to cleave a portal back to Fodlan from the dark void that Solon banished them to)

Striking Strength: At least City Class+, possibly far higher (Half as strong as the full power of the Sword of Creator) | At least Mountain Class, possibly Small Country Class+ (Can hurt the Immaculate One and Nemesis)

Durability: At least City level+, possibly far higher (Can endure attacks from characters comparable to him) | At least Mountain level, possibly Small Country level+ (Can tank hits from the Immaculate One, Hegemon Edelgard, and Nemesis)

Range: Extended Melee Range to Several Meters with the Sword of the Creator, Hundreds of Meters with Magic

Standard Equipment: Sword of the Creator

Weaknesses: Divine Pulse has a limit to how far back it can rewind time, and has a finite amount of uses

Crests (紋章 Monshō) are a game mechanic introduced in Fire Emblem: Three Houses. They serve as combat enhancements that empower their wielders with special properties in battle. These can range from damage increases to attacks or preservation of spell usage. Crests are fixed to specific characters and cannot be removed. Their effects act as passive skills that activate randomly, activating more often if they are a major crest and less often if they are a minor crest.

Divine Pulse: Due to his connection with Sothis, Byleth can rewind the course of a battle to correct costly mistakes. When activated, Byleth can reverse previous actions performed up to a specific point. Both Byleth and enemies actions are rewound. If Divine Pulse has at least one charge remaining and Byleth dies, then Divine Pulse automatically activates to allow Byleth an opportunity to rewind immediately to a desired spot during the battle, thus preventing his death unless all charges are used. Byleth can have a maximum of 13 charges.

Key: Base | Fused with Sothis

Lavagirl (The Adventures of Sharkboy and Lavagirl) Lavagirl's Profile (Sothis-Fused Byleth and Queen of the Volcanoes Lavagirl were used, and speed was equalized)