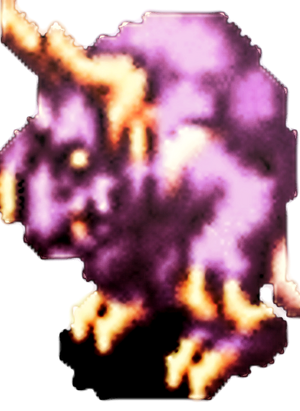 A bizarre creature, apparent cousin to the malicious Reavers met in the lowest level of the insidious dungeon known as Midlight's Deep, the Byblos (personal name unknown) allies itself with Ramza Beoulve in an attempt to destroy the corrupted wizard Elidibus, who transforms into the Lucavi Serpentarius. Though Serpentarius possesses the ability to summon the greatest of all Espers, Zodiark, Byblos and Ramza triumph over this mysterious Lucavi, and the Byblos decides to follow Ramza, being the only demonic entity he encounters in his travels that is sympathetic to his cause (Reavers, their natural cousins, along with Archaeodemons and Ultima Demons, are always hostile)

Attack Potency: At least Large Planet level (On par with Elidibus, the most powerful of the Lucavi, who was capable of utilizing the full power of Zodiark. May have helped Ramza and company defeat Ultima if the party defeats Elidibus first)

Speed: Sub-Relativistic (On par with an end-game party, Elidibus, and Ultima)

Range: Standard melee range. At least dozens of meters with magicks and abilities

Intelligence: Above average. Able to navigate Midlight's Deep, an incredibly daunting maze where almost no one who has entered has survived. Capable of casting powerful magicks.

Retrieved from "https://vsbattles.fandom.com/wiki/Byblos_(Ivalice)?oldid=4108483"
Community content is available under CC-BY-SA unless otherwise noted.