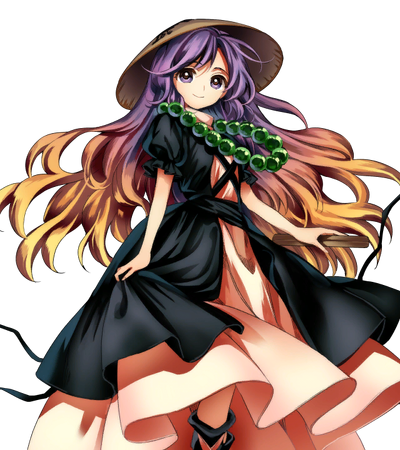 Byakuren Hijiri (聖 白蓮, Hijiri Byakuren) is a Buddhist nun and magician, sealed away by humans for the kindness she showed Youkai, before being released from her seal during the events of Undefined Fantastic Object. Originally a human, Byakuren turned to magic to escape old age after the death of her brother, and became a Youkai. Realizing that her prosperity and power relied on the human fear and belief of Youkai, Byakuren worked to protect other Youkai while making herself out to be a great Youkai hunter. However, she eventually grew to genuinely care for the Youkai she protected. When the humans who had flocked behind her realized this, they punished her by sealing her deep within Makai; however, her followers would, thousands of years later, free her.

Powers and Abilities: Superhuman Physical Characteristics, Flight, Magic, Danmaku, Enhanced Senses, expert in close combat, Statistics Amplification (Can "buff" herself to vastly increase her physical strength), Forcefield Creation (Can create a forcefield to block incoming attacks. Passively creates a barrier around her when she is stunned), Non-Physical Interaction (Can harm Phantoms and Evil Spirits with her regular attacks), Resistance to Mind Manipulation (Youkai can resist the effects of the true Moon, which can drive humans insane and kill them if they look at it), Immortality (Types 1 and 3), Regeneration (Low-Godly; can regenerate solely from her incorporeal "mind")

Range: Standard melee range, at least Tens of Meters with Danmaku (Her firing range should be comparable to Sakuya's, who can throw knives at least 36 meters)

Intelligence: Byakuren was capable of manipulating a nation into believing she was a great youkai hunter while secretly being a youkai who aided youkai, and she is capable of keeping up politically in the religious conflicts with Miko.

Weaknesses: Byakuren needs her Sutra Scroll to call upon the full extent of her abilities, and without her magic she is only as physically strong as a human. She dislikes conflict, avoids killing and is vulnerable to spiritual attacks