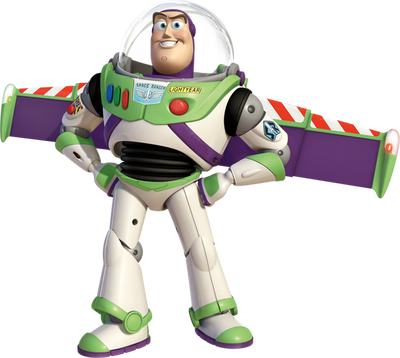 Buzz Lightyear is the deuteragonist of the Disney/Pixar Toy Story movies. He is a spaceman action figure originally belonging to Andy Davis. Buzz was created during a time where astronauts were especially popular amongst children. His arrival in the original Toy Story created conflict with Andy's favorite toy, Sheriff Woody, although this rivalry would eventually blossom into a lifelong friendship.

Age: At least in his 10s (His toy series was made recently in Toy Story 1)

Powers and Abilities: Small Size (Type 1), Immortality (Type 2; Should be comparable to Sid's toys), Longevity, Inorganic Physiology (Type 1), Stealth Mastery, Preparation, Self-Sustenance (Type 2), Limited Light Manipulation (Glows in the dark. His laser has been used as a lantern on multiple ocassions. Not combat applicable), Gliding (He can glide with his wings, though he needs extreme speed to archieve this, like that of a firework), Possibly Martial Arts (Although he doesn't show any feats, he could be comparable to Demo-Buzz), Multiple Personalities (Demo-Buzz and Spanish Buzz), Full Martial Arts when in Demo mode, Acrobatics when in Spanish mode, Resistance to Pain

Attack Potency: Below Average level (Can harm other toys. Said toys can survive long falls, being stepped on, thrown around, or kicked by humans, and being bitten by a medium-sized dog), possibly higher (Comparable to Ducky and Bunny, who considered themselves capable of overpowering an old lady). Wall level with rockets (Most rockets can deal out 22 Kilojoules of force when exploding)

Speed: At least Below Average Human (Usually seen as slower than humans), possibly Superhuman (Can keep up with Woody). Subsonic with rockets (Most rockets go at such speeds)

Lifting Strength: Below Average Human (Comparable to other Buzz Lightyear models, who can lift Slinky Dog, Mr. Potato Head, Ham and Rex all at once with high difficulty. Comparable to Woody, who did this)

Stamina: Above Average (Walked from Andy's house to Al's penthouse by foot without rest)

Intelligence: Varies from Average to Below average (Although he has had random spurts of intelligence before, Buzz has trouble pronouncing words, such as "S'mores". Woody had to explain to him what consciousness was, and even then he misunderstood the concept, believing that the noises his buttons made were his thoughts)

Weaknesses: During the first movie, he entered a state of depression and an existential crisis when he noticed he was a toy, although he has learnt to deal with this. Demo-Buzz actually believes he is a Space Ranger, and will follow the orders of anyone who identifies themselves as "Captain". Spanish Buzz is overly dramatic and will befriend anyone who identifies themselves as "Amigo". Both of these personalities believe that their laser actually works, that they are human-sized, etc. If he doesn't detach the rocket on his back before it explodes, he will die.

Note: This profile represents the Buzz Lightyear from the Toy Story franchise. It's not to be confused with his Kingdom Hearts counterpart nor the cartoon character.

Trash and the Gang (Five Nights At Freddy's) The Gang's profile (Demo-Buzz was used, the fight took place in an open field)