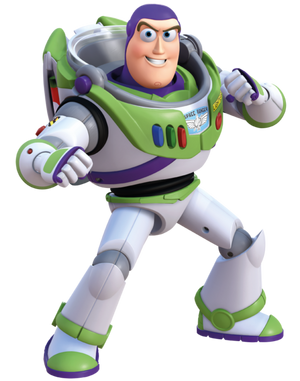 Buzz Lightyear is the self-proclaimed Space Ranger and a friend of Woody at the Toy Box world, who alongside Sora, Donald and Goofy, went to search for his missing friends and get what was going on.

Age: At least in his 10s (His toy series was made recently in Toy Story 1)

Powers and Abilities: Superhuman Physical Characteristics, Small Size (Type 1), Immortality (Type 2), Longevity, Inorganic Physiology (Type 1), Stealth Mastery, Self-Sustenance (Type 2), Summoning, Explosion Manipulation and Flight (Via Rocket Ruckus), Energy Projection (Can fire lasers from his arm), Non-Physical Interaction (Can harm Heartless), Resistance to Pain, Absorption, Death Manipulation (Unaffected by Heartless, which passively kill and absorb things around them), Data Manipulation (Ansem The Wise stated that the "heart" cannot be contained by data, and that the process itself would be incalculable), Existence Erasure (Can take hits from Heartless, which can do this with any attack)

Attack Potency: At least Large Star level (Can keep up with Sora, Donald and Goofy)

Intelligence: Above average (Skilled planner and leader, knows how to hide around humans, etc.)

Note: While there are statements made by Nomura and Pixar of Kingdom Hearts III being canon to Toy Story, they have been dismissed because such statements contradict each other, so to avoid confusion, this Buzz is to not be confused with the mainstream one.