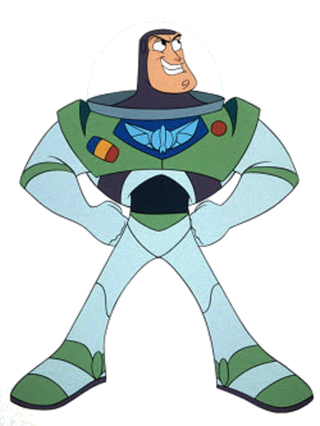 Buzz Lightyear is the deuteragonist of the Disney/Pixar Toy Story movies and the titular protagonist of his own television series. He also appears in both the Toy Story Toons and Toy Story Treats shorts. His often repeated catchphrase is: "To infinity and beyond!" He also returns as a supporting character in Toy Story of Terror! and Toy Story That Time Forgot.

Tier: 8-B physically and with the grenade launcher

Powers and Abilities: Superhuman Physical Characteristics, Flight, His suit protects him from the vacuum of space, Can shoot laser beams out of his wrist, Very good at close combat, Very good at fighting with any kind of gun

Attack Potency: City Block level physically and with the grenade launcher (Harmed Zurg and destroyed a small asteroid with ease. Can easily melt steel and obliterate walls along with top halves of large buildings. Comparable to characters who can damage him)

Speed: Superhuman on foot, FTL with his jetpack (Star Command jetpacks can keep up with Buzz's ship which has traveled at these speeds) with Massively FTL reactions (Piloted his ship to avoid the Uni-Mind's beam at the last second. The beam from Zurg's evil-infused Uni-Mind can reach other planets in mere seconds)

Standard Equipment: A spacesuit, The wrist laser, several plasma pistols, his jetpack and a rocket launcher

Weaknesses: Can be stubborn sometimes.

Note: This is the "real" Buzz from the animated cartoon, Buzz Lightyear of Star Command, not the toy from the Toy Story franchise.