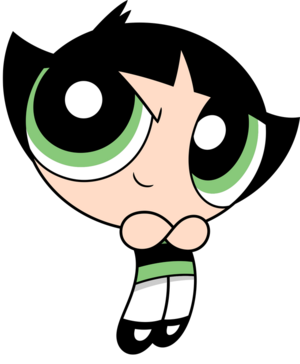 Buttercup Utonium is one of the three main protagonists of The Powerpuff Girls. She is known for being the most tomboyish and aggressive of the team.

Attack Potency: At least Building level (Casually flicked a grown man through a wall, comparable or slightly stronger than Bubbles who made a monster explode, Cut down a stalactite that crushed a monster that was much bigger than her)

Speed: At least Hypersonic (Can dart in between rooms of her house faster than the eye can see, Comparable to Blossom who kicked a ball so hard it caught fire), Possibly higher (Flew from Townsville to Monster Island in a short time frame, though the distance between the two locations is currently unknown)

Durability: Presumably at least Large Building level (Comparable to Blossom who tanked being pummeled into the ground by a monster the size of a skyscraper)

Range: Decreased Melee Range due to her stubby arms, several meters with Heat Vision, tens of meters with energy projection

Intelligence: Seems to be a fairly inexperienced fighter, but still competent.

Weaknesses: A quick temper, gets annoyed at being called princess, reckless and arrogant, fear of spiders

Retrieved from "https://vsbattles.fandom.com/wiki/Buttercup_(2016)?oldid=5657864"
Community content is available under CC-BY-SA unless otherwise noted.