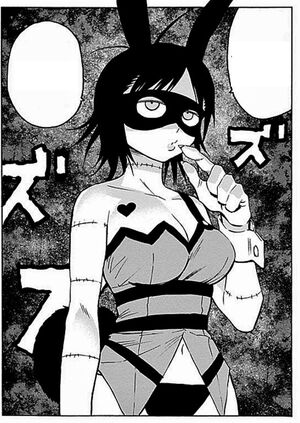 Burgundy is one of Akim's daughters and is sent, along with Kelly, to defeat the demon world's territory bosses and bring back their corpses for Akim to use.

Powers and Abilities: Superhuman Physical Characteristics, Maryoku Manipulation (Maryoku functions similarly to Chi, exsists in place of a Soul and fuels a demon's Magic), Necromancy (They are able to possess pieces of corpses and stick them togather to form a functional body), Regeneration (High-Low) (can pull removed body parts back together), Immortality (Types 2, 3, 6 and 7), Possession of corpses

Attack Potency: Likely Building level (Should be compairable to Akim right after he absorbed Grimm's Maryoku)

Speed: At least Superhuman (Should be faster the Staz and Wolf)

Stamina: Limitless (She is a walking corpse)

Intelligence: Low (She's easily distracted, has a poor memory and rarely thinks for herself)

Weaknesses: She's easily distracted, has a poor memory and rarely thinks for herself

Retrieved from "https://vsbattles.fandom.com/wiki/Burgundy?oldid=4493525"
Community content is available under CC-BY-SA unless otherwise noted.