VS Battles Wiki
Register
Don't have an account?
Sign In
in: Spongebob Squarepants, Movie Characters, Pirates,
and 23 more 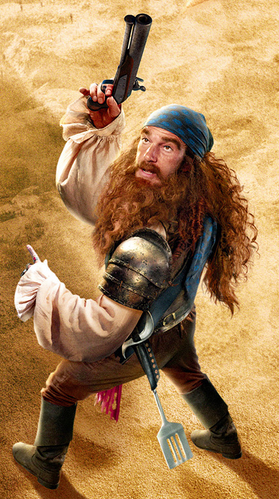 Burger Beard the Pirate is the main antagonist of the film The SpongeBob Movie: Sponge Out of Water.

Tier: 8-B physically, High 7-C with the Burgermobile

Origin: The SpongeBob Movie: Sponge Out of Water

Speed: Average Human with Supersonic reactions (Deflected several acorns shot by The Rodent with his spatula). Superhuman movement speed with the Burgermobile with Supersonic attack speed

Durability: Large Town level (On top of the aforementioned feat, he survived getting kicked to Bikini Atoll by Plank-Ton)

Stamina: High (Endured a fight with SpongeBob and his friends)

Intelligence: Above Average (Created the Burgermobile, a ship that can go on land with wheels and turn into a food truck, as well as a gun that shoots butter)

Weaknesses: Extremely cocky and arrogant. The Magic Book can easily be ripped from his possession and destroyed