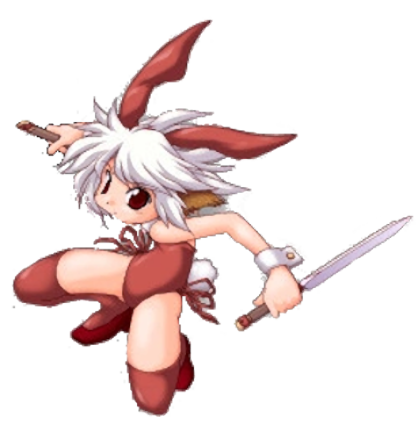 1999X; Bunny was just an ordinary rabbit girl. That is of course, until the day the Mighty Thermomewclear Power Plant went critical. After the explosion, Bunny was left cursed with cat ears, in addition to the rabbit ears she already has! Seeking a cure for her curse, she was led to a large cavern known as the Devils’ Labyrinth. Now, she must brave the depths of this dungeon, overcome the powerful 7 Devils, and meet with the Fairy Princess, Chelsea. Otherwise, she may never be rid of this awful cat curse of hers.

Origin: Bunny must Die: Chelsea and the 7 Devils

Stamina: High (Fought herself during a labyrinth)

One of the following:

Key: Base | End of Story

Start a Discussion Discussions about Bunny (Bunny must Die)