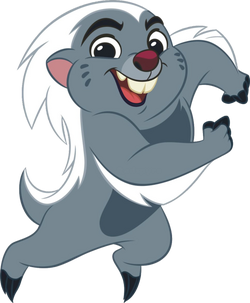 Bunga is a fearless honey badger and Kion's best friend in the Disney Junior show The Lion Guard. He is the adoptive nephew of Timon and Pumbaa. Though annoying his position on the team is the bravest.

Age: Unknown (Younger than Simba, but around the same age as Kion)

Powers and Abilities: Resistance Negation to venom and sharp objects, very agile, can shoot a powerful stink from his body

Attack Potency: Possibly Street level (Was able to take on hyenas and fight against Kenge, who was troubling the hyenas like Janja)

Speed: Superhuman (Can keep up with Kion and can be hyperactive at times)

Durability: At least Street level (Has sat on warm steam from a volcano as if it was a hot tub)

Intelligence: Unknown (Although Rafiki states he will be the smartest animal in the pride lands only when he thinks, Bunga can be naive at times. Despite of this, he knows what to do when times are serious)

Weaknesses: Cocky, naive at times (Thought that being immune to snake venom meant he could survive anything)

Retrieved from "https://vsbattles.fandom.com/wiki/Bunga?oldid=4245248"
Community content is available under CC-BY-SA unless otherwise noted.