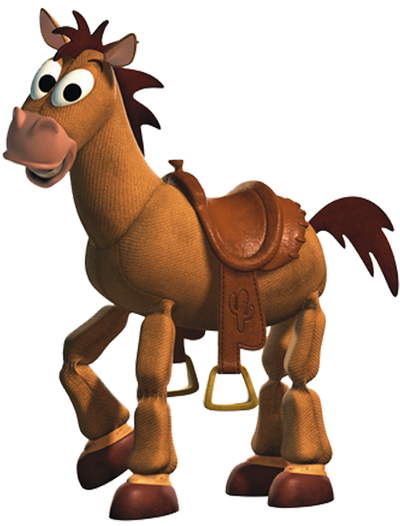 Bullseye is Woody's horse and one of the characters introduced in Toy Story 2. Although he is a horse, the way he acts can be similar to that of a puppy. He is extremely affectionate towards Woody, Jessie and the other toys. He doesn't have a speaking voice; instead, he neighs and makes other horse noises. Yet he understands human speech.

Age: Likely at least in his 50s (Comparable in age to Woody)

Attack Potency: Below Average level (Can harm other toys. Said toys can survive long falls, being stepped on, thrown around, or kicked by humans, and being bitten by a medium-sized dog), possibly higher (Comparable to Ducky and Bunny, who considered themselves capable of overpowering an old lady), Human level when charging (Assuming that he weighs around three pounds and using the baseline for superhuman speed, he should be able to deal out 107 joules of force)

Speed: Superhuman (Kept up with a plane before liftoff. Comparable to RC who kept up with cars driving at moderate speeds and outran a dog)

Lifting Strength: Below Average Human (Comparable to Buzz Lightyear, who can lift Slinky Dog, Mr. Potato Head, Ham and Rex all at once with high difficulty. Can carry Buzz, Woody, and Jessie on his back at the same time with ease. Comparable to Woody, who did this)

Stamina: High (Ran from an airport to said airport's landing track with no signs of being tired despite carrying Buzz on his back)

Intelligence: Average (Despite not being capable of speech, he can understand it. Reflects and understands emotions and complex situations. Minus the fact that he can't speak, he has human intelligence)

Retrieved from "https://vsbattles.fandom.com/wiki/Bullseye_(Toy_Story)?oldid=6049285"
Community content is available under CC-BY-SA unless otherwise noted.