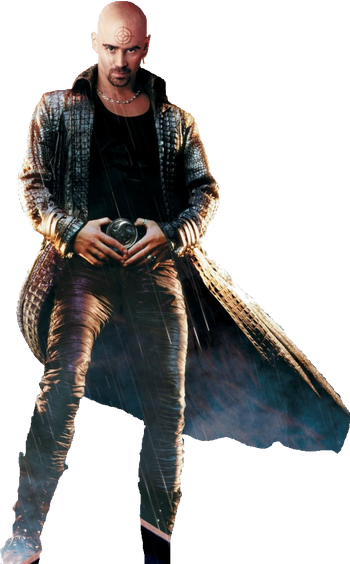 Bullseye is the professional name of an Irish mercenary with the uncanny ability to throw any object with deadly accuracy and force. When he's called to settle some of the Kingpin of Crime Wilson Fisk's business, he meets the Daredevil, the only person in the world who's ever made him miss his target, and swears to kill the man behind the mask himself.

Powers and Abilities: Superhuman Physical Characteristics, Martial Arts, Weapon Mastery (Anything he grabs becomes a lethal projectile), Ability to calculate angles and trajectory of his projectiles to perfection

Speed: Subsonic combat speed and reactions (Catches a sai midair and pins a fly with a syringe. Comparable to Daredevil)

Stamina: Above average (Can fight for extended periods of time)

Weaknesses: Extremely eccentric. Obsesses over those who manage to evade his aim.

Retrieved from "https://vsbattles.fandom.com/wiki/Bullseye_(2003_Movie_Version)?oldid=6240117"
Community content is available under CC-BY-SA unless otherwise noted.