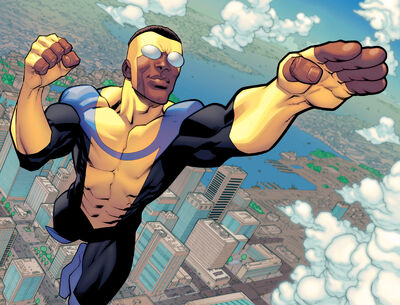 Attack Potency: Planet level (Took out The Walking Dread, and the Mauler Twins, Could slightly harm Invincible, and briefly fight Dinosaurus, who claimed that Invincible did not compare to him in raw strength. The Immortal saw it as necessary to use a bomb within himself to explode and kill him in order to escape being captured by Bulletproof. Stronger than Mister Immortal)

Stamina: Quite high (Depends on his kinetic energy absorption)

Weaknesses: His resistance to injury does not extend to forces that do not have a great deal of kinetic energy, so he is vulnerable to strangling and crushing attacks. Bulletproof cannot indefinitely sustain a charge of kinetic energy, and maximum exertion of his powers will quickly drain him of potential energy

Retrieved from "https://vsbattles.fandom.com/wiki/Bulletproof_(Image_Comics)?oldid=5480514"
Community content is available under CC-BY-SA unless otherwise noted.