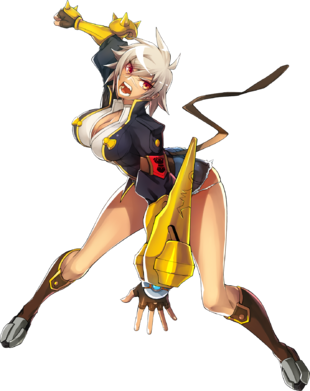 Bullet is a mercenary who is originally in a squad with Tager before he became the Red Devil, however after being severely wounded from another mission, she was left behind to recover as her squad went onto a mission to retrieve a causality weapon, only for seemingly all of them to have died by the hands of the Mad Dog Azrael. After the incident, she's searched everywhere for clues on what the real secret behind her squad's downfall was, which eventually led her to Sector 7.

Superhuman Physical Characteristics, Ars Magus User, Martial Arts, Enhanced Senses (Sensed Valkenhayn while concealing himself), Non-Physical Interaction (Can harm Arakune), Limited Glyph Creation (Can create glyphs when unleashing her power), Fire Manipulation, Explosion Manipulation, and Homing Attack, Statistics Amplification (Via Overdrive), Air Manipulation (Via Burst), Regeneration Negation (Up to High-Godly; is able to utilize Ars Magus, a weapon capable of killing the Black Beast, a creature that has the ability of Self Observation, which is what Terumi used to regenerate from Hakumen's Time Killer)

Resistant to the Following: Paralysis Inducement (Could fight Hakumen without getting paralyzed), Transmutation (As a chosen, she's unaffected by the Embryo's effect to turn everything into seithr), Poison Manipulation, Madness Manipulation, Biological Manipulation, and Statistics Reduction (Everybody can resist Seithr to some extent which is poisonous, can induce addiction and deteriorate bodies, as well as reducing the power of others), Time Manipulation (Can resist the effects of Cauldron and/or Boundary, which stops time by existing), Memory Manipulation (Can resist the effects of Cauldron and/or Boundary, which erases memories), Mind Manipulation (Able to resist the boundary/cauldron, which when entered or get closed, will result in taking infinite information, dating across beginning of time and all possibilities), Perception Manipulation (Resist the effects of Ars Magus, which nullifies senses of the user), Soul Manipulation, Healing and Regeneration Negation, and Fear Manipulation (Is capable of fighting against Ragna numerous times with the Azure, which can inflict soul damage beyond the help of a multiversal entity, and negate any form of Recovery, is also unfazed by his passive fear hax, can withstand the blows of the Azure, which is far superior to the Nox Nyctores, which are also superior to Ars Magus, weapons that are capable of killing the Black Beast, a creature that has the ability of Self-Observation, which is what Terumi used to regenerate from Hakumen's Time Killer), Existence Erasure/Void Manipulation (Resists Cauldron/Boundary's effects, which described to be losing everything you were and everything you'll ever be), Physics Manipulation (Could tanks blows from Azrael, who is so strong that he bends and breaks physics whenever he strikes), Technology Manipulation (Is unaffected by the effects of Seithr, which can mess with technology), Power Nullification (Is able to use her powers despite Kushinada's Lynchpin being activated), Explosion Manipulation, and Spatial Manipulation (Was able to withstand Bolverk, which can pierce through space) and Corrosion Inducement (Resists getting corroded by the Cauldron)

Attack Potency: Small Country level+ (Kept up with CP Tager who can block CP Hazama's blows. Can barely keep up with Azrael) | Large Planet level (Could keep up with CF Noel)

Range: Extended melee range, Dozens of meters with her abilities

Intelligence: Above Average. Was trained in combat since she was very young by mercenaries. Furthermore, she has been in and has won many battles in her life whether against the NOL or any other organizations. 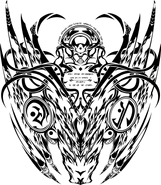 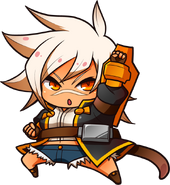 Bullet's chibi portrait
Add a photo to this gallery