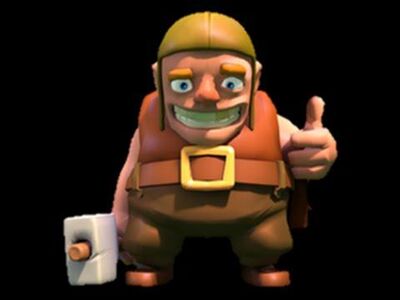 Builders are the workers that live inside the Builder's Hut. They can upgrade, build, and rebuild structures, as well as upgrade your Heroes. They can also remove Obstacles such as trees, rocks, bushes, etc.

Powers and Abilities: Superhuman Physical Characteristics, Creation of many powerful buildings and can spawn anyone from Clash of Clans (except other Builders) as a result

Attack Potency: At least Small Building level (Can one-shot Goblins and vaporizetrees by hitting them) | At least Large Building level (Can spawn 9 P.E.K.K.As at once and can do so until his Elixir runs out, can be used to mass produce hundreds of Archers) | Moon level (Accidentally destroyed the moon through Troops he spawned in minutes)

Speed: Supersonic (Has run from various Troops and reacted to the Archers’ arrows) | Supersonic (Same as the rest) | FTL (The attack reached the moon in less than a second)

Lifting Strength: Class 10 (Pulled a small building by himself with ease. Pushed down a Spring Trap, which were made to fling Giants)

Stamina: High (Can work on a building for several days at once, him and everyone else are more than capable of eating sawdust if they feel like it. The Barracks will keep going for as long as the village has Elixir)

Intelligence: Genius, capable of creating anything from highly amped tesla coils that use a mixture of electricity and magic, to basic cannons made to shoot people, can improvise these parts into other things such as trees; is also an expert at finding the place that would provide the biggest tactical advantage for the village

Weaknesses: Most of his buildings require a few hours of prep time to get ready, but has been able to bypass them a few times in the past; this weakness can also be circumvented with the use of Gems.

Start a Discussion Discussions about Builders (Clash of Clans)