Bui is a member of Team Toguro and an antagonist during the events of the Dark Tournament Saga. He is very calm and peaceful and does not like to speak, he is voiced by Tetsuo Kaneo in the Japanese version and by Vic Mignogna in the FUNimation dub.

Powers and Abilities: Superhuman Physical Characteristics, Longevity, Skilled at using an Axe, Ki and Energy Manipulation (Used as his Battle Aura), Acrobatics (Without Armor), Using his Battle Aura Bui can levitate, The Battle Aura also serves as a form of protection from attacks of a certain level (For instance the Battle Aura protected Bui from the heat associated with Hiei's Jaō Ensatsu Kokuryūha technique)

Lifting Strength: Class K (Easily battles with extremely heavy armor, is able to throw around large tiles without breaking a sweat) | At least Class K (Superior to Base Younger Toguro)

Stamina: Very high. Much weaker character can go for weeks without sustenance and fight with injuries that would be fatal to normal physically fit humans.

Standard Equipment: A large axe and battle armour which suppresses his true power.

Intelligence: Appears to be fairly intelligent in battle, otherwise unknown. 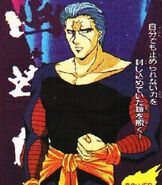