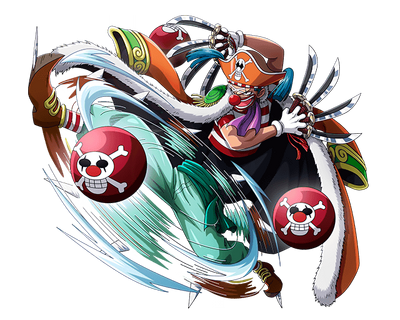 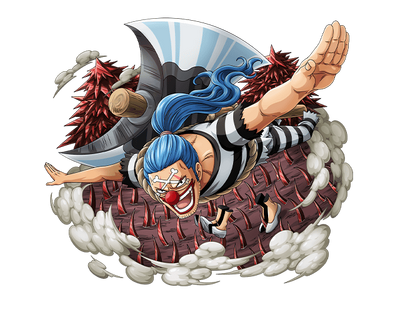 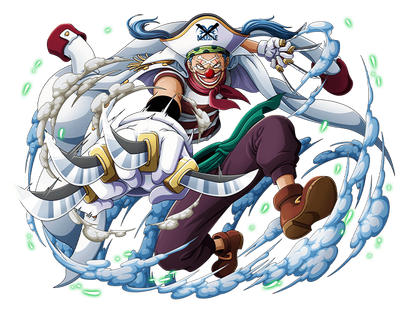 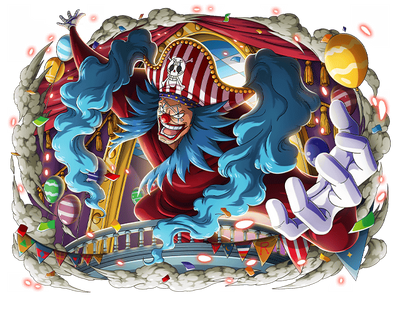 Buggy the Clown was initially the first real pirate that Luffy encountered early on in his travels. Buggy is a rather gaudy individual who used to be on the legendary Roger Pirates crew, along with Luffy's idol Shanks, who Buggy eventually bore a grudge against for unwittingly foiling a scheme to find a legendary treasure. After Gold Roger's death, the two went their separate ways, and while Shanks went on to become one of the Four Emperors, Buggy hung around the relatively tame East Blue.

His Devil Fruit is the Chop-Chop Fruit (Bara Bara no Mi), which lets him split his body apart as he pleases. After his defeat at Luffy's hands, he teamed up with Luffy's stalker with a crush Alvida, and after a failed attempt at revenge entered the Grand Line in pursuit of the Straw Hats.

Powers and Abilities: Superhuman Physical Characteristics, Weapon Mastery, Ate the Bara Bara no Mi, a Paramecia type Devil Fruit which grants him complete immunity from cutting attacks (Vertical or horizontal), and allows him to split his body into parts and rejoin it, Pseudo-Flight (He can make parts of him fly as long as his feet are touching the ground), Explosion Manipulation (via Muggy Ball), Social Influencing (Escaped and survived from Impel Down prison, gathering lots of criminals under his command by sheer luck to the point of convincing them to follow his lead just bluffing), Minor Adaptation (Adapted to the oxygen shortage in Skypiea)

Attack Potency: Likely Large Building level+ physically (Posed a threat to East Blue arc Monkey D. Luffy and could hurt him and Zoro), City Block level with the Buggy Ball (Destroyed a large portion of a town with a single use) | Likely Town level+ via Powerscaling (Shouldn't be much weaker than Mr. 3), Large Town level with Muggy Ball (Damaged the Minotaurus, which in turn seriously hurt Luffy post Enies Lobby saga with a single blow)

Speed: Hypersonic+ (Luffy struggled to dodge some of his attacks, and Buggy could react and dodge Luffy's strikes) | Unknown, Possibly Massively Hypersonic+

Stamina: Very High (High stamina reserves as well as good endurance and recovery. As a child when he was only an apprentice he fought in the 3 day long battle between the Roger Pirates and Whitebeard Pirates [Although he didn't fight for the entirety of the battle as he took breaks to sleep], he fought and lasted through the paramount war at Marineford, he's superior to his two subordinates who fought for 12 hours straight for his position. He has high recovery speeds as he was able to recover in less than a minute from being fried by a Lightning bolt as well as recovering quickly from powerful attacks from Luffy that seemed to deal great damage to him.)

Intelligence: Skilled Combatant, he is capable of fighting Luffy for a time on a seemingly equal footing and as an apprentice fought in many battles with the Roger Pirates. Is Gifted in creating inventions such as the Buggy and Muggy Balls, however he's often childish and incompetent and tends to take immature attitudes in scenarios. As of Marineford his ego has inflated and he often feigns intelligence, only to have his true incompetence revealed, although he is not "stupid" in the traditional sense, he is prone to gross misjudgments that cost him; usually this is due to his overconfidence

Weaknesses: Cannot swim and becomes immobilized if more than half of his body is covered in water, loses his powers and becomes helpless if more than half of his body is submerged in water, can be stabbed as opposed to being cut, when Buggy's body is split up he is more susceptible to attacks, an enemy can do all sorts of things to his separated body parts from groin kicks to tying up most of his body parts, Buggy can only control his separated pieces from and up to a certain distance. There is a cutoff point as to how far he can use his separated parts. If a part goes any further from the cutoff point, he loses all control of that part. This includes levitation and the user consciously using that body part altogether. This distance is a 200 Bara Bara diameter circle around the point where the person touches the ground, for Buggy to be able to levitate any of his body parts, his feet must be on the ground as they are the only body parts of the user that can't levitate

Bara Bara no Mi (Separate Separate Fruit): A Paramecia type Devil Fruit, the fruit's major strength, as demonstrated by Buggy, is that the user becomes permanently immune to damage from being cut, regardless in what manner, be it vertical, horizontal, or otherwise. Instead of being wounded or even killed from such attacks, the user's body simply becomes sliced up pieces. In this state, the user is still alive and can control his sliced up body. They can then manipulate the sliced up pieces to either reattach themselves back together or execute unique attacks. As part of the Devil Fruit's powers, the user can also split their body apart by themselves without the need of being chopped up by others in the first place. He is also still able to be alive without being connected to major parts and organs of his body for long periods of time. Additionally, the levitation effect seems to be able to extend to things in contact with the user, allowing them to bypass gravity by lifting objects regardless how heavy they actually are for as long as Buggy has a firm grip on them.

Start a Discussion Discussions about Buggy the Clown