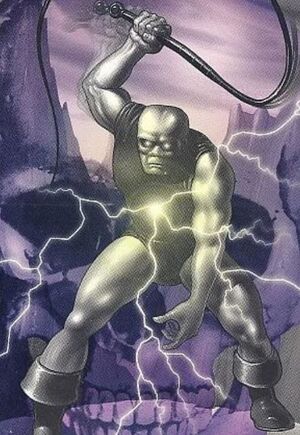 After escaping the prison with his friend Lester Knight Chaykin on his pterodactyl, they arrive back at his village only to be met by more conflict as the Warden is having his guards search for them for containment or death. This escalates into a conflict in which Lester dies and Buddy feeds the Warden to wild beasts.

Tier: At least 9-C physically, weapons range to at least 9-B

Attack Potency: At least Street level physically and with his Electric Whip, at least Wall level with the Laser Gun

Standard Equipment: The Laser Gun and his Electric Whip

Retrieved from "https://vsbattles.fandom.com/wiki/Buddy_(Heart_of_the_Alien)?oldid=5065093"
Community content is available under CC-BY-SA unless otherwise noted.