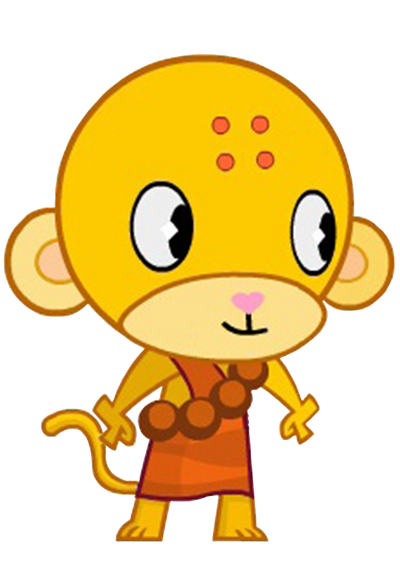 Powers and Abilities: Superhuman Physical Characteristics, Martial Arts (Highly skilled in hand to hand combat), Weapon Mastery (Skilled with a variety of weapons and can use virtually anything as a lethal weapon), Flight, Telekinesis, Resurrection (Can bring things that have recently died back to life), Fire Manipulation/Heat Manipulation (Can generate enough friction from rubbing his hands together to set his hands on fire and cause an entire lake to boil)

Attack Potency: City level (Punched a ninja hard enough to split a mountain in half, Created enough friction with his hands to boil a lake)

Lifting Strength: Class 1 (Lifted a book this large and wielded it as a weapon)

Intelligence: Above Average (Monkey is highly skilled in martial arts, able to outmatch numerous opponents simultaneously as well as wield nearly anything he can get his hands on as a lethal weapon.)

Weaknesses: Is generally a pacifist and will usually only fight if something he cares about is destroyed or he is attacked outright

Retrieved from "https://vsbattles.fandom.com/wiki/Buddhist_Monkey?oldid=6619345"
Community content is available under CC-BY-SA unless otherwise noted.