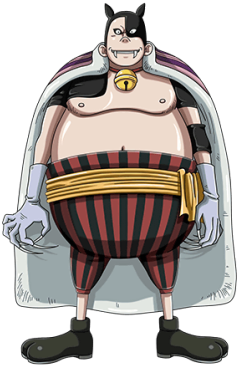 Buchi, along with his brother Sham, is a protector of the Black Cat Pirates' ship, the Bezan Black. The brothers are also known as the Nyaban Brothers and are some of the strongest men under Captain Kuro.

Powers and Abilities: Superhuman Physical Characteristics, Skilled with his Claws

Stamina: Likely Average | Very High (Is mentally programmed to not back down no matter how tired or weakened)

Intelligence: Above Average, makes minor battle tactics before rushing in and commonly fakes being scared to trick his opponents and catch them off guard | Non-Sentient, blindly rushes towards his opponents and is only programmed to kill, not think

Weaknesses: Usually isn't as powerful without his brother, Sham backing him up as a tag-team member | None notable