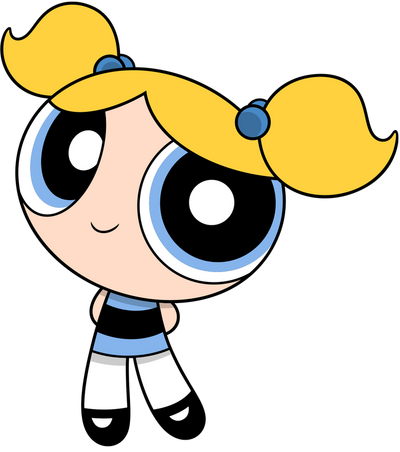 Attack Potency: At least Building level (Can fight giant monsters, punched a dinosaur so hard that it exploded)

Speed: At least Hypersonic (Can fly faster than the eye can see, Reacted to Blossom's Hypersonic kickball), possibly higher (Flew to Monster Island from Townsville in a short time frame)

Durability: Large Building level (Survived an extended beat down by a monster the size of a skyscraper without any lasting damage)

Range: Decreased Melee Range due to her stubby arms, higher via Energy Constructs

Intelligence: Not as bright as Blossom or as skillful as Buttercup, but still competent. Shown to be an expert at programming computer software; such as games and even hack into the internet itself.

Weaknesses: Naive, not as experienced as her sisters, claim to have an allergic reaction to meatloaf, suffers from claustrophobia

Note: For her original incarnation in the 1998 series, see here.

Dark Bubbles
Add a photo to this gallery

Start a Discussion Discussions about Bubbles (2016)