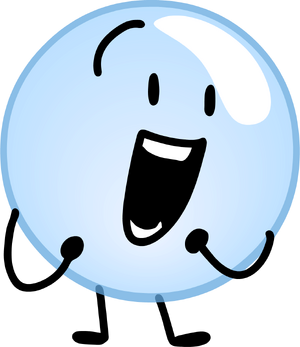 Tier: 7-B, higher with a spaceship

Powers and Abilities: Superhuman Physical Characteristics, Bubble Physiology (Is a living bubble), Toon Force, Self-Sustenance (Type 1, Can breathe in the vacuum of space), Vehicular Mastery (Capable of piloting spaceships), Resurrection (Via the Bubble Recovery Center), Ice Manipulation (Via Freeze Juice Syringes). Has access to the following abilities with a spaceship: Spaceflight, Energy Projection, Statistics Amplification (Was mentioned to have a super speed mode, albeit unused). Resistance to Extreme Cold and Cosmic Radiations (Unaffected by the extreme conditions of space)

Attack Potency: City level+ (Traded blows with Announcer, Firey, and Leafy), higher with a spaceship (The spaceships are easily capable of one-shotting other contestants with ease)

Speed: Massively Hypersonic+ (Able to keep up with other contestants, which would include Puffball, who could fly from space back to Earth in roughly a minute) with Sub-Relativistic attack speed via powerscaling (Comparable to Coiny, who could throw a stick 2,760 miles in a second), FTL with a spaceship (The spaceships are able to outspeed lasers)

Lifting Strength: Class 25 (Lifted all the members of Team Ice Cube, including Spongy, who had his jet with him which weighs this much, should be comparable to other FreeSmarters such as Book and Match, who could lift a large portion of a broken Hand-Powered Recovery Center and metal boxes with ease)

Durability: Below Average level (Has been consistently shown to be easily one-shotted/popped by sharp objects (shards, cakes, kicks, spikes, tacks, forks, etc.) and pressure (Being crushed, overwhelmed, tightened, etc.), to the point she even acknowledges how easy it is for her to pop), possibly higher (Barely managed to catch all the members of Team Ice Cube when they fell on her, however, this could be an Outlier), At least City level+ with a spaceship (Should be more durable than other contestants’ base forms)

Stamina: Very High (In “Lofty”, she was able to climb up a flight of stairs along with the other contestants without seemingly stopping for 16 days)

Range: Standard melee range, Tens of meters via Freeze Juice Syringes (Comparable to Pencil, who threw the syringes this far)

Intelligence: Average (Despite her courageousness and care to her friends, Bubble can sometimes tend to worry in situations, and her trying to interfere can often cause consequences to her)

Weaknesses: Bubble can be easily popped, and she tends to worry too much.

Mr. Burns (The Simpsons) Burns’ Profile (Speed was equalized, and Burns had his gun)