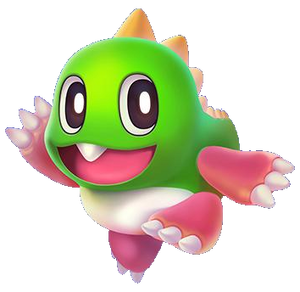 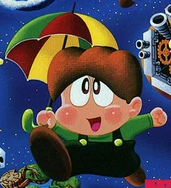 Bub (also known as Bubblun) is one of the main protagonists in the Bubble Bobble series alongside his twin brother, Bob. He was turned into a Bubble Dragon by Super Drunk after the brothers attempted to rescue their girlfriends, Betty and Patty, who were kidnapped after wandering into the Wizard's Forest. The duo sets out to travel through the 100 levels of the Cave of Monsters and defeat the girls' kidnapper.

Bub's trademark ability involves him breathing bubbles from his mouth. If an bubble makes contact with an enemy, they will get trapped inside it, allowing Bub to pop an bubble with his spikes in order to defeat them. Along with utilizing bubbles to attack enemies, Bub is also able to jump on them in order to reach new heights.

Powers and Abilities: Superhuman Physical Characteristics, Weapon Mastery, very mild form of Toon Force (Can heal from insane damage off-screen and come back from things like being flattened), Regeneration (Mid; Regenerated after being flattened), Self-Sustenance (Type 1) and Underwater Breathing (Type 2; Can survive in the vacuum of space and being deep underwater on a planet made mostly of it for long periods of time), Size Manipulation and Large Size (Type 0; Can multiply in size to become much stronger. Can blow out bigger bubbles which traps multiple enemies at once by charging them), Bubble Manipulation/Breath, Danmaku (Can shoot as much bubbles as he can), Transmutation (Can turn enemies into food/jewelry when popping them out of a bubble), Flight (Can float in the air by riding inside a bubble or holding it inside his mouth like a balloon), bubbles can bounce off walls, Can break barriers with a green bubble, If collided with a giant bubble, Bub can charge into enemies, Aura (When charging bubbles, Bub's spines will glow), Elemental Manipulation (Via elemental bubbles), Electricity Manipulation (Via Lightning Bubble and Yellow Cross which showers the screen with lightning), Water Manipulation (Via Water Bubble and Blue Cross which floods the area with water), Fire Manipulation (Via Fire Bubble, Fireball Bubble and Red Cross that gives him fire breath), Air Manipulation (Via Tornado/Wind Bubble), Ice Manipulation (Via Ice Bubble), Earth Manipulation (Can perform earthquakes with Book), Explosion Manipulation (Can generate an explosion via Bomb Bubble/Pink Lamp), Rainbow Manipulation (Via Rainbow Bubble), Snow Manipulation (Via Snow Bubble), Can shoot a spiral of deadly spinning stars via Star Bubble, Sound Manipulation (Via Melody Bubble), Metal Manipulation (Via Metal Bubble), Light Manipulation (Via Shine Bubble), Death Manipulation (Via Death Bubble), Time Stop (Via Clock), Statistics Amplification (Can make bubbles move faster and travel a farther distance via Candies. Can boost his speed via Shoes), Superhuman Speed (Via Shoes), Summoning (Can summon meteors which makes enemies angrier than usual via Gold Skull and make stars fall from the sky via Tiara), Spaceflight (Via Spaceship), Transformation (Can transform into his human form at will as seen in the Game Boy version), Possible Resurrection and Resistance to Electricity Manipulation (Was electrocuted to death with his eyes gone and suddenly came back to alive) | Superhuman Physical Characteristics, Parasol Mastery (Can use his Magic Parasol as a shield, pick up & throw items/enemies and glide/fly in the air), Magic and Rainbow Manipulation (Can create rainbows to use them as platforms, defeat enemies while generating/crushing it and collect items), Statistics Amplification (Can increase the number/speed of rainbows and make all effects permanent with Potions and Rainbow Special. Can merge up to 5 droplets into a large one which has more damage), Enhanced Senses (Can find hidden items with a bell when it rings whenever Bub stands above them), Forcefield Creation (Can surround himself with five globes by using a book or a protection fairy via Peacock Feather that kills enemies on-contact), Flight (Can use a book to grant wings which allows Bub to jump multiples times in mid-air), Invulnerability (Can use a protection cape to protect himself from all harm), Superhuman Speed (Via Shoes), Spaceflight (Via his parasol)

Attack Potency: At least Large Star level (Defeated Dreg and Beluga who stole the stars from the night sky), likely higher (Defeated the Time Eaters who are going to eat the Tree of Time, Madama Luna who have fallen the Arcana into dimensional cracks called dreams and Develon who not only took the universe, but also intends to remove everyone's hopes and dreams by using Cosmo Bubbles) | At least Large Star level (As strong as his bubble dragon form), likely higher (Defeated Chaostikhan who conquered the universe by unleashing a magma of menacing monsters throughout it)

Weaknesses: Can't capture enemies with bubbles until they're damaged enough by popping them

Mario (Mario Bros) Mario's Profile (Bub was in his Bubble Dragon form, and speed was equalized)