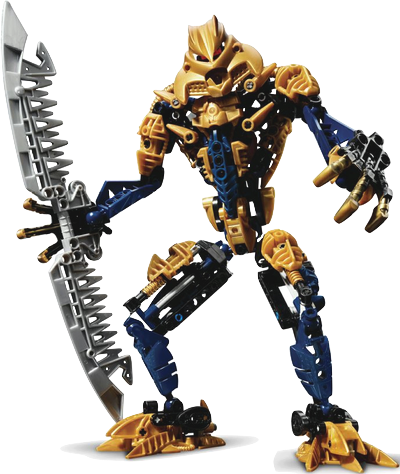 Brutaka is one of the members of the Order of Mata Nui, a secretive organization devoted to serving the will of Mata Nui. Alongside his friend, Axonn, he was given the job of defending Ignika, the Legendary Mask of Life. While he was once a loyal, noble warrior, following the Great Cataclysm, he began to lose faith in Mata Nui.

Classification: Member of the Order of Mata Nui

Powers and Abilities: Superhuman Physical Characteristics, Longevity, Skilled Swordsman, Energy Manipulation, Electricity Manipulation, can grow stronger by absorbing Antidermis, Portal Creation, Dimensional Travel and BFR with Olmak, Resistance to Mind Manipulation/Telepathy (All members of the Order of Mata Nui have their minds shielded from telepathic assault; not even Teridax can break through Brutaka's mental shields) and Time Stop (Broke out of Teridax's Stasis Field) | All his previous abilities, Flight/Levitation, Matter Manipulation (Brutaka is capable of creating Rahi from Protodermis), Teleportation, and likely many others (After being exposed to a high amount of Antidermis, he gained several new powers, including some of the Kraata Powers)

Attack Potency: Island level (Claims to have uprooted mountains and fought against Teridax, oneshot all of the Toa Nuva with a single strike, launched an attack strong enough to bring down a Kanohi Dragon, and is a threat as great as all the Piraka combined) | At least Island level (Much stronger than before, could have taken off Axonn's head with one good hit), possibly much higher (Much stronger than before. He is closer to Makuta's power level than Tren Krom and presents a threat to the Great Spirit Robot).

Speed: Massively Hypersonic+ (Can keep up with Toa, who can fight with Avohkah, lightning-based Rahi that possess the properties of lightning and were mistaken for lightning bolts, as well as Bohrok-kal, Rahkshi, and Makuta who can manipulate electricity), possibly Relativistic (The Toa Inika could react to and dodge Umbra in his light form) | Massively Hypersonic+, possibly Relativistic

Stamina: Extremely high. Brutaka's stamina should be comparable to that of Toa, and the Toa Manga fought against the Kanohi Dragon for an entire month. | Extremely high. When Brutaka's mask was broken by Teridax, he was still incredibly powerful.

Range: Extended melee range, Kilometers with his abilities (His range should be comparable to a Toa's, such as Pohatu, who destroyed the massive Odina Fortress with a single timed Stone Blast), Planetary with Teleportation, Low Multiversal with Olmak's Dimensional Gates

Intelligence: Brutaka is a highly intelligent and skilled warrior, viewed as a scholar with a sharp analytical mind in addition to a dangerous fighter.

Weaknesses: After being exposed to the Pit Mutagen, Brutaka lost control over Olmak and could no longer breathe air without the aid of his Breathing Helmet, just water, though this was eventually reversed.

Lightning Blast: Through his Rotating Blades, Brutaka can shoot lightning blast strong enough to strike down all the Toa Nuva in oneshot and bring down a Kanohi Dragon.

Kraata Powers: After being exposed to high amounts of Antidermis, Brutaka gained access to a number of the Kraata Powers and other abilities of the Makuta, though the exact ones he got are unknown.

Key: Base | Empowered by Antidermis