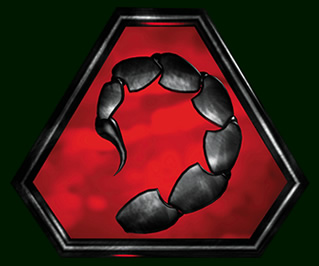 Nod claims to be an ancient order that operated in ancient Egypt, but it is unclear if the claims are true. With the arrival of Tiberium on Earth, Nod capitalized on the alien substance and the political instability that it brought to the Earth to spread their influence. Nod has extremist religious views on both Tiberium and their charismatic and mysterious leader Kane. They are technologically advanced thanks to aid from the alien data matrix known as the Tacitus.

Tier: 7-B with nuclear weapons. Most standard vehicles are around 8-C for tanks to 8-A for powerful vehicles like the Redeemer.

Name: The Brotherhood of Nod

Age: At least 80 years, but claims to be thousands of years old.

Population: Unknown, but likely at least hundreds of thousands (have held several countries under their control at once).

Territory: Has conquered several countries during each one of the Tiberiam wars, but does not depend on holding land.

After CABAL's defection Nod would steal a copy of GDI's Electronic Video Agent (EVA) AI as a substitute after reprogramming it.

Kane would later create LEGION. Like CABAL, LEGION could make decision's on it's own but would remain loyal to Kane. LEGION would be upgraded with Scrin-derived technology to enhance it's effectiveness and was able to recover after being heavily damaged by a virus.

CABAL, EVA, and LEGION could connect commanders to their troops real time allowing pin point decisions to be made in an instant.

With Kane's return he would later deploy a new series of Cyborgs under the Marked of Kane that did not have emotions. These new cyborgs could even be made from dead bodies through what was known as "Redemption". Cyborgs would become normal again during the Ascension Conflict.

Attack Potency: Around 7-B with nuclear weapons. Most forces are around 9-A to High 8-C with some more powerful vehicles being around 8-A

Power Source: Has used both nuclear and gas and in later conflicts can use Tiberium to generate power.

Industrial Capacity: With mostly automated assembly vehicles and buildings can be rapidly made as needed on the battlefield.

Military Prowess: Unknown, but likely at least hundreds of thousands (have held several countries under their control at once).

Notable Individuals: Kane has always been the political and religious leader of Nod who's orders cannot be questioned.

Before revealing itself Nadia Zelenkov, the Director of the Soviet NKVD, was employed by Kane to manipulate the Soviet Union.

During the First Tiberium War Seth served as Kane's second in command but was caught plotting a takeover of Nod and executed by Kane himself. A man named Greg Burdette served as Nod's propaganda agent to discredit GDI.

The cold and silent Gideon Raveshaw served as the head of Nod's Black Hand until he was turned into an almost mindless Tiberium mutant cyborg and slain by GDI.

Dr. Elena Petrova would defect to Nod and after gaining Kane's trust was put in charge of Project ReGenesis to create Nod's first Tiberium mutated cyborgs. She eventually transforms herself before being slain in battle.

Nod was known to employ professional mercenaries like Carlos Mendoza and Sakura Obata.

By the Second Tiberium War the Inner Circle of Nod managed the Brotherhood. It's most notable member was the fierce Anton Slavik. During the Firestorm Crises with Kane's supposed demise and the rest of the Inner Circle being assassinated by CABAL's rebellion he oversaw the entire Brotherhood. The ever loyal Oxanna Kristos served as his advised and propagandist.

Hassan was in charge of the Eastern hemisphere Nod forces but started cutting secret deals with GDI. He attempted to have Anton Slavik executed but lost and was executed himself. Hassan's propaganda agent was Maychek who was also killed for treason.

Cesar Vega commanded the Western hemisphere forces and was a drug dealer on the side. He eventually makes the mistake of taking Kane's mysterious "alien ship" for a joy ride but couldn't control it and it crashed leading to capture GDI. Kane decides to execute him by nuclear strike for his incompetence but he kills himself by drug overdose before it hit.

By the Third Tiberium War the outspoken Brother Marcion had assassinated Anton Slavik and taken control of the Black Hand. Kane would force him back inline as the Black Hand was needed.

The skilled Kilian Qatar served as Nod's Commanding officer and an adviser to Kane. But she is framed for a traitor and executed by Kane.

Ajay would serve as an important intelligence officer and tactician. After Kilian Qatar's executing and Kane ordering Nod to aid the Scrin his faith in Kane faltered and he abandoned Nod (fate was not shown).

The fanatical Alexa Kovacs was put in charge of the LEGION project. She became paranoid of traitors. After hearing Kilian Qatar say something that she misunderstood as being unloyal to Kane she frames the other woman to get her executed. She becomes distrustful of the AI LEGION that she was in charge of developing due to it's predecessor was CABAL that killed her parents and betrayed Nod so she infects it with a virus to try and destroy it. Since Kane sees this she commits suicide.

After allying with GDI, Gideon and Marcus would defect to splinter groups but were both defeated. Before his defeat Gideon destroyed all but one of the optical implants needed to allow Kane to use the Scrin tower to ascend and killed Dr. Johann Pascal who developed them to prevent any more from being made.

Depending on the player's choice Parker may also defect to Nod.

Weaknesses: The extremist within Nod's leadership can sometimes work against Nod as important figures are assassinated. 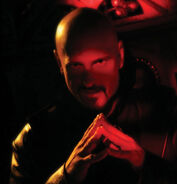 Add a photo to this gallery
Retrieved from "https://vsbattles.fandom.com/wiki/Brotherhood_of_Nod?oldid=6617734"
Community content is available under CC-BY-SA unless otherwise noted.