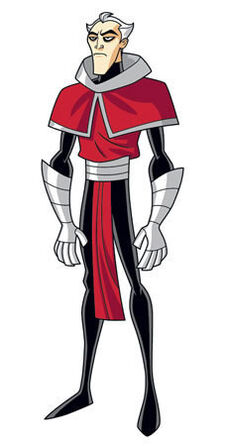 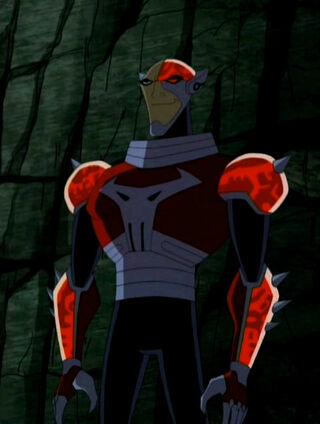 Brother Blood is the charismatic and sadistic Headmaster of the H.I.V.E. Academy and the main antagonist of Season 3. He is best known for being the arch-nemesis of Cyborg and his former mentor.

Classification: Headmaster of the H.I.V.E. Academy

Powers and Abilities: Superhuman Physical Characteristics, Telepathy (Can read people's thoughts, including hidden ones), Mind Control, Illusion Creation (Can mentally induce illusions into his victims' minds), Willpower Manipulation (Can bend other people's will to him via his Mind Control), Telekinesis, Water Walking, Forcefield Creation and Attack Reflection (Can create telekinetic barriers capable of deflecting physical and energy attacks), Energy Projection, Electricity Manipulation (Via Energy Projection, can generate psychic electricity), Master Hand-To-Hand Combatant, Acrobatics, Genius Intelligence, Resistance to Sound Manipulation (Was completely unfazed by his own sonic resonator, while being only meters away from it) | All the previous powers plus Cyborgization, Technological Manipulation, Teleportation (Can teleport himself or others by touching them)

Attack Potency: At least Building level+ (Stronger than Cyborg and easily overpowered him the two times they fought each other while still being human), Small City level via Sonic Resonator (The resonator created by Blood would have created tidal waves powerful enough to entirely wipe out Jump City) | At least Building level+ (Stronger than he was before)

Intelligence: Genius. Brother Blood is a master tactician who is an excellent teacher and leads the H.I.V.E. Academy with great efficiency and managed to deduce Cyborg's identity with ease. He is also a very skilled tactician and his photographic memory allowed him to acquire Cyborg's schematics and use them for his plans.

Weaknesses: His obsession over defeating Cyborg and bend his will.