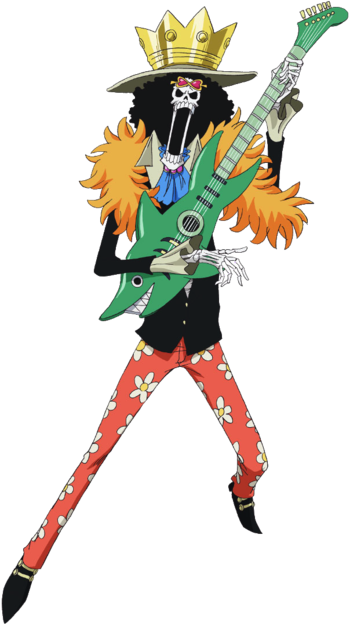 Brook is the crew's musician. He ate the Revive-Revive Fruit (Yomi Yomi no Mi), which enabled his spirit to reanimate his corpse after he died. Unfortunately, after his death, his spirit got lost for an entire year before finding his body, and it had decayed into a skeleton. He later developed the ability to control his own soul. Deprived of his shadow by the Warlord of the Sea, Gecko Moria, he was adrift within the gloomy Florian Triangle until he met the Straw Hats by chance.

Despite some bad manners, such as asking girls to show him their underwear and impatiently waiting for food, Brook is friendly, cheerful, not always serious, sociable, straightforward, compassionate, loyal, keeping promises (even if the promise was made decades ago). He is also polite and refers to others adding a respectful suffix "- san".

According to Zoro, Brook is a man of honor, willing to do anything for his friends. Like Sanji, he protects women.

Нe also has the distinct habit of making puns relating to his skeletal state at every opportunity. He's eighty-eight/ninety years old, though he doesn't age after dying at the age of thirty-eight. He is also a fencer who executes extremely fast attacks and can use music as a form of hypnosis.

His dream is to reunite with Laboon, a whale who lives at the entrance to the Grand Line, whom the Straw Hats had previously met. Fifty years ago, the baby whale had befriended the pirate crew Brook was a part of, but they had to leave him behind as their travels became more dangerous. After his shadow was recovered from Gecko Moria, Brook happily accepted Luffy's invite to join the crew, pleased to have finally found new friends to call his own.

As many One Piece characters, Brook has his own signature laughter which is "yohohoho".

His bounty was 33,000,000 Berries. Due to his body having decayed, he went undetected by the World Government until he was betrayed by his manager at the end of the time skip. His wanted poster is now updated. His current bounty is 83,000,000 Berries.

Powers and Abilities: Superhuman Physical Characteristics, Adept Swordsman (Specializes in fencing), Water Walking, Immortality (Types 2 and 7), Soul Manipulation and Resurrection (Ate the Yomi Yomi no Mi, a Paramecia type Devil Fruit which allows the user to come back to life and allows the user to access other soul-based abilities), Inorganic Physiology (Type 1), Sleep Manipulation (Via Nemuriuta: Flanc), Self-Healing (Can recovered himself when he drinks milk), Possibly Willpower Manipulation when playing music (Uses music to inspire cultists to fight for themselves), Resistance to Electricity Manipulation (Due to not having flesh. He also covered himself in lightning to attack Oars without showing major damage) | Same as before, Astral Projection (Can separate his soul to move individually of his body), Immortality (Type 3), Regeneration (likely Mid, can survive with his head cut off and reattach it and other body parts), Ice Manipulation (Able to freeze objects and people by channeling the power of his soul through his sword [Soul Solid, the "Freezing Sword"]), Non-Physical Interaction (Capable of affecting and damaging Big Mom homies such as Zeus and Prometheus), Spiritual Awareness, Air Manipulation (Can generate wind blades with sword slashes and thrusts, can also use this in conjunction with his freezing ability), Durability Negation (Can freeze the blood flow of opponents, affecting them internally. Can hit the soul), Broadway Force, Mind Manipulation when playing music (Able to hypnotize people with music: forcing them to sleep, create illusions in their minds, etc.)

Attack Potency: Likely Large Town level (Despite being weaker than Ryuma, he was able to keep up and clash with the reanimated zombie. Assisted the Straw Hats in harming Oars, but was unable to harm any of the Pacifista himself) | Small City level+ (Fought and damaged Prometheus and Zeus while fighting Big Mom). He can also bypass conventional durability to a limited extent with his freezing capacity and that he can manipulate his opponents' souls with his music. Opponents that are being possessed by a spirit would be most affected by this).

Speed: Massively Hypersonic+ (Undoubtedly faster than Franky, given speed is Brook's forte and that he was able to perceive Zoro's and Ryuma's movements when they fought whereas Franky could not, one of the faster characters in the crew and also fought Ryuma himself though he lost) | At least Massively Hypersonic+ (Speed-blitzed Big Mom while she was in the middle of one of her cravings, though this seems like an outlier, and only occurred when Big Mom was surprised by him asking to see her panties)

Stamina: Greatly High, due to being a skeleton, he is also unfazed by some injuries that would normally be critical (Such as having his skull shattered, etc.)

Range: Extended human melee range with sword and by virtue of size (9 feet tall), at least dozens of meters with musical powers.

Standard Equipment: Soul Solid, a Shikomizue (A sword hidden in a cane) and his violin

Yomi Yomi no Mi (Revive-Revive Fruit or Underworld-Underworld Fruit): A Paramecia type Devil Fruit which enhances the user's soul to the point where they can come back to life after dying once, remain alive until their body is sufficiently damaged, and to use several other soul-based abilities. The power that allows him to live in the human world is not organs nor muscles: it is his soul.

Music: Brook's devotion to music not only helped him to pass the lonely days during his long isolation but also serves as a combat tool.

Fencing Style: Brook uses an unnamed form of swordsmanship that resembles classical fencing. It specializes in speed and thrusting techniques. 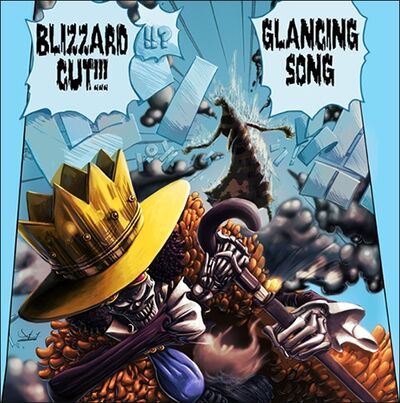 Brook when he was human
Add a photo to this gallery