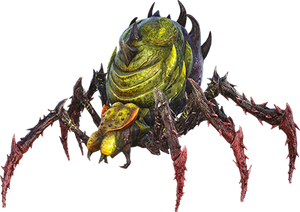 The Broodmother is a boss monster from the game Ark: Survival Evolved. It is a giant Arachnid with a base green body on Easy, orange on Medium, and red on Hard, and dark orange or brown legs. The Broodmother has two viciously large fangs seemingly dripping with venom. Large spikes can be seen on the abdomen.

Lifting Strength: At least Class M (Much stronger than smaller creatures to an unknown extent, comparable to other bosses)

Stamina: High (Comparable to The Manticore)

Range: Tens of meters via sheer size, Higher with projectiles

Retrieved from "https://vsbattles.fandom.com/wiki/Broodmother_Lysrix?oldid=5681121"
Community content is available under CC-BY-SA unless otherwise noted.