VS Battles Wiki
Register
Don't have an account?
Sign In
in: Tier 9, Characters, Gun Users,
and 32 more 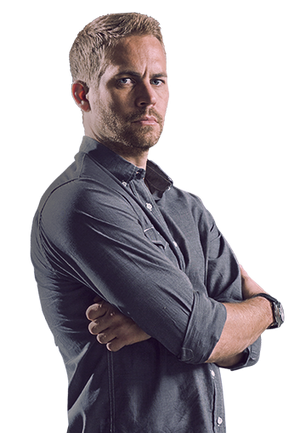 Brian O'Conner is a former officer in the Los Angeles Police Department and former agent in the Federal Bureau of Investigation. A protagonist in the The Fast and the Furious franchise, Brian transitions from an officer sworn to uphold the law to a wanted criminal in The Fast and the Furious and 2 Fast 2 Furious. He makes a full transition to the criminal life when he abandons the FBI to help Dominic Toretto, a street racer, avenge the death of his wife, Letty Ortiz and allows him to escape the law again, this time accompanying him. He falls in love with Dominic's sister, Mia Toretto and the two have a child named Jack. With another child on the way, Brian agrees to do "one last job" when Toretto's crew decide to avenge Han Seoul-Oh, who is killed by Deckard Shaw.

Origin: The Fast and the Furious

Age: 36 by the time he retires from his old crew

Attack Potency: At least Wall level (On par with Dom, Luke Hobbs and the rest of his team, who are all this strong, and Brian can perform the same feats as him. Easily dispatched multiple armed criminals with his bare hands, even tearing a metal basin off of a wall in the process. Completely destroyed the roof of a car, its front windshield and all of its side-windows simply by tackling someone onto it. Fought against Kiet multiple times)

Speed: Peak Human with Supersonic+ combat speed and reactions (Can easily dodge handgun bullets at close range. Outmaneuvered from gunfire and missile from a drone while in his car. On par with Dom, who can dodge and outspeed M4 Carbine rounds and keep up with Hobbs. Barely managed to close his car's front door to save his son Jack from the effects of an explosion). Subsonic with his Nissan GT-R (Stock versions of the Nissan GT-R can hit over 190 mph. His tuned variant can easily go in excess of 210 mph). Subsonic+ to Supersonic+ attack speed with most firearms

Lifting Strength: At least Class 5 (Equal to and can wrestle with Dom, can effortlessly snap necks)

Durability: At least Wall level (Regularly takes hits from the likes of Dom, survived being rammed into a wooden shelf by him with enough force to completely destroy it. Consistently no-sells many kinds of violent accidents. Survived a high dive into water with Dom. Also survived this. Had several run-ins with Kiet), higher with body armor

Standard Equipment: Handguns, assault rifles, shotguns, various cars (Mostly Nissan Skyline R34s or the Nissan GT-R, but he will use other tuner-focused cars)

Intelligence: Gifted. Being a former cop and FBI agent, Brian is trained in H2H combat, marksmanship, and strategic tactics to the point where he can easily keep up with several armed men in combat and still come out on top regardless of their skill level. He's knowledgeable with ammunition and pointing out information during a heist. Brian has also used his profession to organize a SWAT raid on someone to get their job.

Weaknesses: He will put himself in harms' way to protect innocents and loved ones. A little bit obsessed over beating Dom in a drag strip to prove imports being superior to muscle cars.