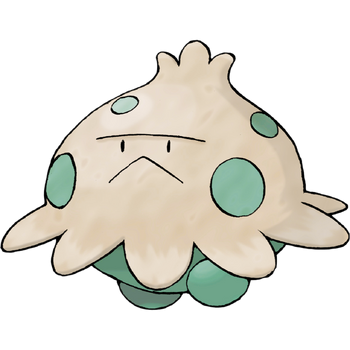 Shroomish is a small Pokémon similar to a mushroom. It has beady black eyes and a half-triangle-shaped mouth. Its upper body is beige with frilled segments along the bottom and a small opening at the top. There are green spots marking its upper body, while its lower body is completely green. It has small, round feet and no visible arms or hands. When it senses danger, it shakes its body and scatters toxic spores from the top of its head. These spores can make trees and weeds wilt and cause whole body pain if inhaled.

Breloom is a bipedal, mushroom-like Pokémon with some kangaroo-like qualities. Most of its body is green, with its head and tail being beige. Breloom is the evolved form of Shroomish. Breloom can stretch to deliver fast punches. Its technique is equal to that of professional boxers.

Attack Potency: Multi-City Block level+ (Comparable to other Pokémon of this level like Diglett and Horsea) | At least Mountain level+ via power-scaling (Comparable to Pidgeot and Fearow)

Intelligence: As a Fighting-type Pokémon, Breloom is an expert-hand-to-hand combatant, possessing a wide variety of physical moves that it supplements with the use of its spores to paralyze, poison, or otherwise incapacitate foes in combat. Its martial technique is often compared to human professional boxers, allowing it to take on opponents much larger than itself

Weaknesses: Takes more damage from Flying, Bug, Poison, Fire, and Ice-type attacks. | Same as before, but it loses its Bug weakness and also gains a weakness to Psychic and Fairy-type attacks