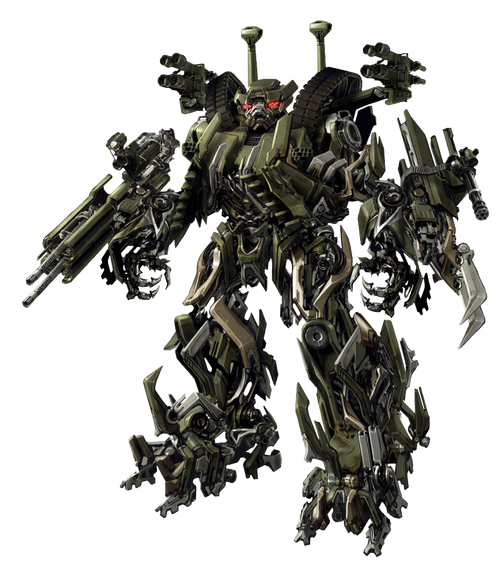 To say Brawl is a warrior is like calling Cybertron a hunk of metal. Brawl does not just enjoy fighting, he is consumed by it. Tearing Autobots apart is embedded into his very core, and every fiber-optic cable of his being is obsessed with wild, unyielding combat. The only thing he enjoys, or even cares about, is the fury of battle. And he loves a good explosion. Particularly if it's one he created, and if it's an Autobot that is exploding.

While it's not uncommon for ambition or independent thinking to cause trouble in the Decepticon ranks, Brawl's never had that problem. This is mostly because he suffers from a severe lack of both qualities. Where others question orders, Brawl simply carries them out, perfectly happy to let Megatron do all his thinking for him.

Age:  At least a thousand years old (Was present before the war started)

Attack Potency: City Block level+ (Can harm those who can harm him)

Lifting Strength: Class 100 (Can grab and throw Jazz around with relative ease, who weighs 1.8 tons. Is a heavily-armed M1 Abrams tank)

Durability: City Block level+ (Survived multiple hits of Ratchet, Ironhide, Jazz and the army before being knocked out)

Stamina: High (Was able to keep fighting even when he was target by Ratchet, Ironhide, Jazz and the army)

Range:  Extended melee range, tens of meters with most of his weapons

Retrieved from "https://vsbattles.fandom.com/wiki/Brawl_(Michael_Bay)?oldid=5792095"
Community content is available under CC-BY-SA unless otherwise noted.