Brandon was an extraterrestrial who crashed landed on earth as a baby, in Brightburn, Kansas. Here he was found by Tori and Kyle Breyer, who named him "Brandon" and adopted him as their own. When he grew into puberty, his alien powers manifested and he begins to quickly develop into a psychopathic murderer. He dons a red cowl, and takes the name of the town he is terrorizing, becoming Brightburn.

Powers and Abilities: Superhuman Physical Characteristics, Flight, Stealth Mastery, Heat Vision, Technology Manipulation (Can turn off and manipulate technology; causing a car to stop and be unable to start again, light bulbs to flicker and explode, radios and phones to be unable to call, etc), Limited Fear Manipulation and Animal Manipulation (Caused chickens to go crazy at his presence), Resistance to Diseases (Has never been sick), and possibly Regeneration (Low)

Attack Potency: At least Wall level (Tore a metal freezer door open, violently smashed through several walls in his house, punched Sheriff Deever so hard that he exploded into paste), likely higher (Destroyed an airplane, in the ending credits he destroys a building complex casually and creates a large forest fire. This is likely not his peak strength)

Speed: At least Subsonic, likely higher (Can move faster than humans can react, easily blitzing them. Moves so fast that he looks like a blur and seems to be in multiple places at once)

Lifting Strength: At least Class 5 (Easily lifted a truck), possibly higher with telekinesis (Used this to rip a metal door in half)

Durability: At least Wall level (Tanked getting shot in the head with a shotgun, a lawn mower blade broke against his arm), likely higher. Human level to his ship's metal

Intelligence: At least Gifted (He is incredibly knowledgeable about multiple subjects, being above anyone in his school, even though he is just a kid)

Weaknesses: Is weak to the metal of the spaceship he came in. Easily angered and has no remorse or feelings towards humans, viewing himself as superior.

Feats: Brandon kills at least five people, with a large amount of other victims (though the amount is unknown).

Brandon's drawing of himself

He's not here to save the world. 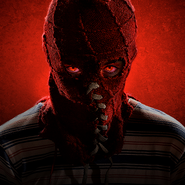