Brandish μ (ブランディッシュ・μ, Burandisshu Myu) is a member of the Spriggan 12 and part of the Alvarez Empire under the command of Emperor Spriggan. She also leads her own team inside the Imperial Army, Brandish Squad.

Intelligence: Above average (She is a leader of Brandish Squad which is a fairly large number of persons inside the Imperial Army, infiltrated into Lucy's house without anyone noticing)

Weaknesses: Brandish suffers from severe hay-fever and will sneeze uncontrollably when exposed to pollen, leaving her open to attacks. Her Command T also cannot affect those with greater magic power than hers, as Neinhart enchanted by Irene demonstrated.

Command T (コマンドＴティー Komando Tī): Brandish's Magic gives her the ability to alter matter, with Erza noting that she wields this Magic at an incredible level; enough to topple entire countries single-handedly to which she has been given the epithet "Country Demolisher". She is able to effortlessly alter the shape and height of something on the scale of Caracole Island, making it much larger than its actual size, and then shrinking the island down to a slither of land so small that there was only room enough for her to stand on it. Brandish has also shown to manipulate something as simple as a weapon to more complex things, such as specific parts (i.e. targeting wounds and cellular masses for medicinal purposes) or all of the biological anatomy of a person, giving her Magic a numerous variety of options. Her prowess of this powerful Magic even can extend to the appearance of some of her targets to look as if they have been outright disintegrated, striking viability to the ones who come to witness it in the act. Even though Brandish has stated that she is capable of altering the size of any and all matter in the world, once confronted by Neinhart, who had been enhanced through Irene's enchantment, she finds her Magic to have no effect whatsoever. 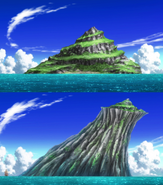 The effects of Command T 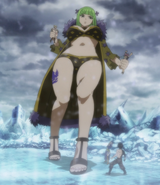