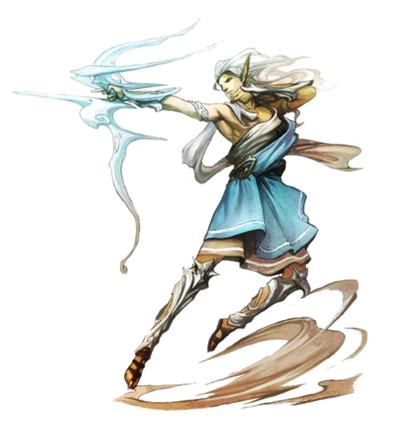 The Brelani were a species of wild Eladrin, good-aligned celestials hailing from the Plane of Arborea. These eladrin in particular refused to outright serve any particular god, instead agreeing to ally with them. They embody the snow, wind, and sand, and were considered lesser to their Ghaele brothers.

They are known as fickle creatures, prone to wandering the dunes, and admonished the lawful and evil alignments, making them staunch enemies of the Devils.

Powers and Abilities: Superhuman Physical Characteristics, Abstract Existence (Type 1, As Outsiders, eladrin are purely abstract in their physiology, lacking any biology in a traditional sense; these particular Outsiders represent the concepts of snow, wind, and sand), Law Manipulation, Chaos Manipulation (Eladrin contribute to the balance of Chaos and Law that makes up reality; with an upset of the balance in favor of either one, severe effects take place within reality, including delusion of the minds of those aligned with the opposite force, inexplicable deaths, etc), Weapon Mastery, Enhanced Senses, Afterimage Creation via Blur, Empathic Manipulation via Charm, Air Manipulation via Gust of Wind, Illusion Creation and Duplication via Mirror Image, Electricity Manipulation via Lightning Bolt, Healing, Weather Manipulation, Purification, Portal Creation and Summoning via Gate, Intangibility, Flight, Magic, Reality Warping, Damage Reduction, Self-Sustenance (Types 2 and 3), Extreme Resistance to Petrification, Electricity Manipulation, Fire Manipulation, Ice Manipulation, Magic, Reality Warping, Holy Manipulation, and Subjective Reality

Lifting Strength: Class 5 (Can push over a metric ton)

Stamina: Superhuman, comparable to adventurers, who can continue to fight after lethal wounds including but not limited to loss of limb or impalement

Range: Hundreds of meters, inter-universal with some spells

Retrieved from "https://vsbattles.fandom.com/wiki/Bralani?oldid=5876636"
Community content is available under CC-BY-SA unless otherwise noted.