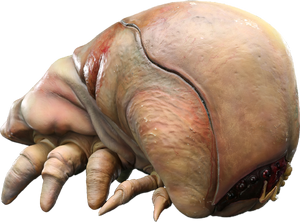 A Brain Bug is the leader of a Bug colony of the Pseudo-Arachnids. It is hinted at in the novel that the Brain Bug is telepathic and it is stated that the "brain" shares a symbiotic relationship with the Bug Colony and that if it dies, the colony dies. The "brains" are easily held by humans in their power suits.

Brain Bugs depend entirely upon their workers and warriors to survive, their own bodies possessing "barely functional legs, bloated bodies that were mainly nervous system."

Powers and Abilities: Telepathy, Biological Manipulation, Mind Manipulation,Large Size (Type: 0), Regeneration (Low-High, Arachnids can create full bodies from a single spore), Reactive Evolution (All arachnids can evolve in very short timeframes if necessary), Immortality (Type: 2 and 3), Sound Manipulation (When a brain bug screams it will burst blood cells in the brain.), Information Manipulation, Self-Sustenance (Types I, II, and III,Spores of arachnids can survive in space, and does not need eat or sleep at all), Natural Weaponry

Lifting Strength: At least Class 5 (Comparable to the Warrior Bugs.)

Range: Extended Melee Range with its sharp tendrils. Planetary via Psychic Attacks (Its psychic attacks can span throughout the entire planet where it resides in.)

Intelligence: Unknown at least Gifted (Are adept in a range of telepathic powers. The Brainbug maintains all of the Bug-Colony through its telepathic powers, controlling the entire race of the Pseudo-Arachnids similar to an army.)

Weaknesses: Immobile; relies on the bugs that it controls to survive. 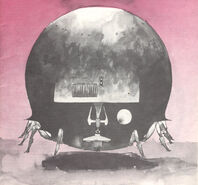 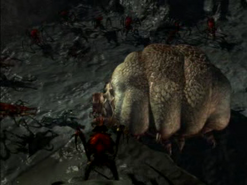 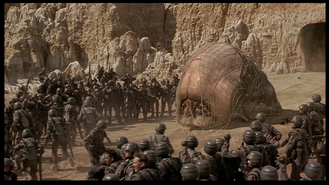 The Brainbug, captured
Add a photo to this gallery

Retrieved from "https://vsbattles.fandom.com/wiki/Brainbug?oldid=6167670"
Community content is available under CC-BY-SA unless otherwise noted.