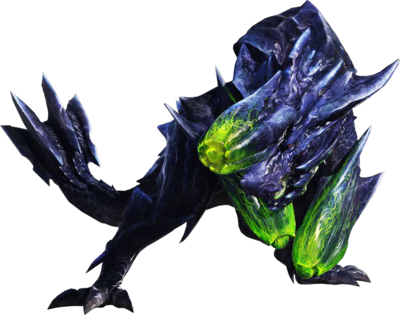 Brachydios is the Flagship Monster of Monster Hunter 3 Ultimate, and a member of the Brute Wyvern class. It inhabits a variety of harsh climates, from volcanic to arctic. Brachydios are easily identifiable by their glowing, green slime-covered horns and "fists," as well as their shiny, armored hide covered in many plates and ridges that are made of obsidian. Unlike other Brute Wyverns, Brachydios sports a pair of long, highly developed forelimbs that it uses as its primary means of defense. Brachydios' forelimbs and horn seem to secrete a mysterious slime.

Superhuman Physical Characteristics, Statistics Amplification (Becomes stronger, faster and more durable when enraged), Rage Power, Sound Manipulation, Explosion Manipulation (Covered in a special slime-mold which is incredibly volatile, can apply slime to several surfaces with fists and horn, when enraged this slime will explode almost instantly), Large Size (Type 0 in terms of height; Type 1 in terms of length), Resistance to Fire, Disease Manipulation, Explosion Manipulation (His armored shell is built to protect himself from his own explosive blasts), Thunder and Heat Manipulation

Same as before, except the addition of Fire Manipulation (Explosions are also capable of causing Fireblight now, besides Blastblight) and Resurrection (Will be able to coming back once if killed at which point it will be in a constant rage mode)

Same as regular Brachydios, except the addition of Ice Manipulation (Capable of freezing the ground when it roars and making giant ice spikes rise from the ground, explosions can spawn ice on the ground) and Status Effect Inducement (Can cause the Snowman status effect)

Stamina: High (Capable of fighting for dozens of minutes and sustaining large amounts of damage and still able to fight)

Intelligence: Above Average (Has a higher weakness to the Dragon Element, which directly attacks the mind, than the average hunter: Brachydios has -5% resistance, while an average hunter has 0% resistance)

Weaknesses: Weak to Water, has to make sure to lick its forearms to re-apply slime mold | Weak to Ice and Water, its explosions will be least effective when a part of its body has been wounded | Weak to Water and Resurrection works only once | Unknown

Feats: Can defeat an Agnaktor with ease. 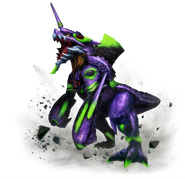 Iceblast Brachydios
Add a photo to this gallery