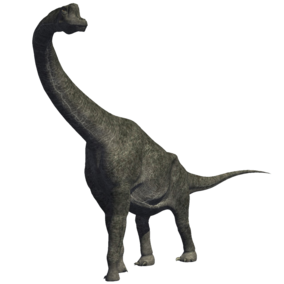 Brachiosaurus is a genus of sauropod dinosaur that lived in North America during the Late Jurassic, about 154–153 million years ago. It was first described by American paleontologist Elmer S. Riggs in 1903 from fossils found in the Colorado River valley in western Colorado, United States. Riggs named the dinosaur Brachiosaurus altithorax; the generic name is Greek for "arm lizard", in reference to its proportionately long arms, and the specific name means "deep chest". It had a disproportionately long neck, small skull, and large overall size, all of which are typical for sauropods. Atypically, Brachiosaurus had longer forelimbs than hindlimbs, which resulted in a steeply inclined trunk, and a proportionally shorter tail.

Lifting Strength: Class 5 (Can support medium to large sized theropods jumping on them)

Retrieved from "https://vsbattles.fandom.com/wiki/Brachiosaurus?oldid=5865430"
Community content is available under CC-BY-SA unless otherwise noted.