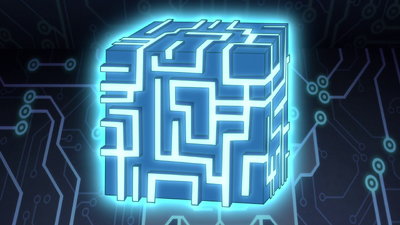 The Box of Truth, also called Truth or Punishments, is a magical truth-telling device that Star Butterfly, Marco Diaz, Pony Head, Jackie Lynn Thomas, Janna Ordonia, and StarFan13 use as a party game in "Sleepover". And was later used in the trial of Eclipsa Butterfly.

Powers and Abilities: Can tell when anyone is lying, Can create projections of what people ask, If someone lies the box will create a cube like structure that will slowly close in until someone tells the truth, Electricity Manipulation (Will shoot blasts of electricity at those who lie, or anyone else in the area), Biological Manipulation

Attack Potency: Universe level+ (Not even the combined power of the Magical High Commission, excluding Lekmet, could escape from the boxes trap. Stated in the book of spells that it can absorb entire universes.)

Durability: Unknown (It appeared to be destroyed in it's first appearance, but in it's return in "Butterfly Trap" it showed no signs of damage, was not affected by one of Star's attacks)

Intelligence: Can always tell when anyone is lying

Weaknesses: Will not harm anyone, if they don't lie.

Retrieved from "https://vsbattles.fandom.com/wiki/Box_of_Truth?oldid=4791016"
Community content is available under CC-BY-SA unless otherwise noted.