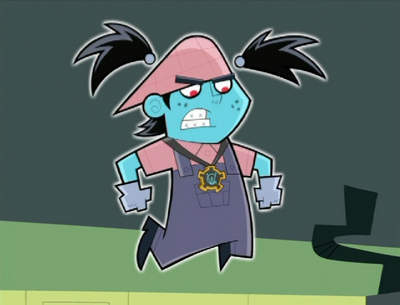 Box Lunch is the daughter of the Box Ghost and Lunch Lady from ten years in the future. She is summoned to the past by Clockwork and is ordered to fight him. After their battle, Box Lunch is returned to the future after her time medallion is removed from around her neck.

Speed: FTL (Able to keep up with season 2 Danny Phantom, who's this fast)

Lifting Strength: Class 5 (Stronger than Pariah's Soldiers, who can casually lift trucks over their heads and toss them)

Stamina: Superhuman (Ghosts can fight for hours and uses their abilities repeatedly for days without showing any signs of fatigue)

Intelligence: Average (She appears to have the combined personalities of her parents but she isn't a fool like her father)

Weaknesses: Ghosts are physically incapable of interacting with the real world unless they make themselves a physical form. While invisible, ghosts can be seen using infrared vision due to their bodies giving off heat, They can be harmed and have their powers nullified by the effects of Blood Blossoms, Ecto-ranium, and Anti-Ghost Technology like the Specter Deflector.

Body Control: All ghosts have the ability to manipulate their physical forms at will in various ways. Ranging from opening holes in their bodies, splitting themselves in two, stretching parts of their bodies or changing them into weapons (ropes, hammers, blades and more), creating extra limbs and changing their form into goo, gas, smoke, fire, and energy.

Invisibility: All ghosts have the power to turn themselves invisible. Most ghosts use this ability to hide or to sneak up on and surprise their opponents. This power can be passed on to anything and anyone the ghost is touching.

Intangibility: All ghosts have the power to turn themselves intangible. This allows them to phase through walls, other objects and attacks with no issue and effect other intangible beings of the same nature. This power can be passed on to anyone or anything a ghost is touching.

Possession: All ghosts have the power to take over a living being, inanimate objects and even other ghosts by phasing into them. It is shown that more than one ghost is capable of overshadowing a single target at a time and can push other ghosts or the spirit out of a person's body. When overshadowed, the target loses all control of their body and the ghost's consciousness takes over. The ghost can use most of their abilities while inside the host and physically alter the targets body like increasing muscle mass or turning their skin green and giving them a monster-like appearance. After the possession is over, it leaves the target with nothing but a vague memory of what happened while they were overshadowed and in a dizzy state. A ghost can allow a person to overshadow another with them as long as they are holding on to them. If a ghost is rendered incapable of regenerating, they can swap their consciousness with another and take over their body.

Regeneration: A ghost's physical form is a manifestation of their ectoplasmic energy and consciousness. Due to this, ghosts can restore their physical form after it is damaged. This allows them to recover from cuts, lost limbs, bisected, splattered into puddles, turned to dust and steam. They can even recover from being physically broken down into a non-corporeal state by them Fenton Thermos. If a ghost's central core is destroyed, all of their constructs are destroyed and it will take several minutes before their consciousness can reform a new one.

Box Manipulation: Like her father, Box Lunch can control any square or box and manipulate the contents inside them by infusing them with her ghost energy, using them as a weapon.

Food Manipulation: Like her mother, Box Lunch can create and manipulate food. Using it as a weapon, armor, and can fuse with it. She can also bring kitchen appliances like stoves to life.

Retrieved from "https://vsbattles.fandom.com/wiki/Box_Lunch?oldid=6720387"
Community content is available under CC-BY-SA unless otherwise noted.