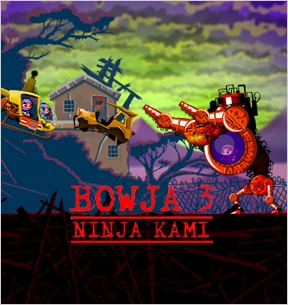 Bowja the Ninja is the titular and silent protagonist of the child webgame series of the same name. He is a highly-trained ninja, but he is known for having a cheeky and childlike personality. His origins are mostly unknown.

Attack Potency: At least Wall level (Fired an arrow with enough strength to move a boulder. With a wooden stick, easily knocked a helicopter back. Shot down a helicopter with a single arrow, although this was accomplished by tearing the propeller off. Knocked down a light pole by pulling on it slightly. Fought a giant metal spider and easily unscrewed the gears that supported it. Twisted a parabolic antenna by shooting it with an arrow. Fragmented a padlock by shooting it with an arrow. Grabbed a man and threw him away with no effort), possibly Small Building level (Casually pushed down boulders. Managed to demolish the rooftop of a large building with his arrows, albeit overtime) | At least Small Building level (Easily picked up a truck and dropped it, instantly destroying it. One-shotted a helicopter using a mini-car. Jumped on top of a giant robot weighing possibly hundreds of tons and knocked it down)

Speed: Superhuman movement speed (Outran falling rubble. Was capable of ramming a motorcycle in the mouth of a giant metal snake and jumping back several meters in a single instant. Was thrown off a speeding truck and managed to leap back into it) with Supersonic+ reactions and combat speed (Capable of evading and reacting to gunfire. When commanding his giant construct, Bowja managed to make it defend itself against bullets before they reached it.) | Superhuman running speed (Vastly outran humans) with Supersonic+ combat speed (Was capable of moving its arms to defend against bullets before they reached its position)

Lifting Strength: Class 5 (Casually pushed down a rocket by pulling on it) | Class 50 (Picked up a large truck)

Durability: At least Wall level, possibly Small Building level (Tanked a fall of hundreds of meters. Easily tanked being hit by a truck. Should scale to normal humans, who can tank speeding carts and shrug off being hit by arrows, and also get hit by explosions at point-blank range and shrug them off.) | Small Building level (Tanked getting shot down by a tank.Can withstand direct attacks from a giant animatronic who can shake a bridge with its steps)

Stamina: High (Capable of fighting for hours with seemingly no damage to his stamina) | Extremely High (As a robot, it can't physically tire out, but it probably can run out of an energy source)

Range: Standard melee range. Higher with arrows, being capable of hitting targets dozens, if not outright hundreds of meters away with nigh-impeccable accuracy.

Standard Equipment: His bow and arrow.

Intelligence: Bowja knows how to pilot helicopters, airplanes, trucks and how to command robots, suggesting that he is extremely experienced when it comes to driving. He is also an excellent combatant, having excellent skill with his bow and arrow and having enough experience to easily overwhelm many men with a combination of strategy and strength. During his battle with the giant animatronic in the bridge, Bowja was able to strategize his way to victory despite being outmatched in raw power, demolishing the bridge and using the enormous fall to kill the robot. Bowja is also able to casually solve puzzles and manage his way through giant mazes, meaning he has an excellent sense of direction.

Key: Normally | In control of the Robot

Retrieved from "https://vsbattles.fandom.com/wiki/Bowja_the_Ninja?oldid=4916134"
Community content is available under CC-BY-SA unless otherwise noted.