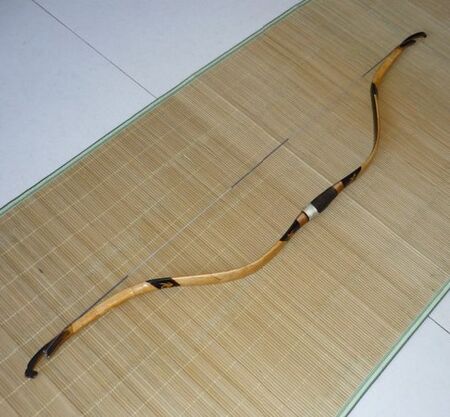 Bows are among the earliest weapons known to man. A bow is a simplistic weapon in design; simply put, a lightweight arrow is shot with the pull of a string. While bows were made obsolete in favor of guns in war, bows are still used in hunting and sporting events (particularly the Olympic sport of archery). More recently, compound bows were developed, boasting stronger draw weights than modern recurve bows. Multiple arrows can be fired in a single shot, although generally multiple arrows being fired at once aren't as effective as firing a single shot.

Age: A little over 5300 (The oldest example was found with the remains of Ötzi the Iceman) | Earliest records of the recurve bow go as far back as the 2nd millenium BC, so a bit over 4000 years | 53 years since its first invention (designed in 1966)

Attack Potency: Athlete level (As displayed by a replica medieval bow with a draw weight of 160 lbs, medieval longbows can shoot 80-gram arrows with a KE rating of 123 joules) | Human level (A bow with a 48-lb draw weight fired a 360-grain arrow at 214 fps (feet per second); this would equate to a KE of 49.6247 joules). Modern bows vary in power by the parts and arrows used), possibly Street level (Bows were used to hunt a wide variety of wild game) | Athlete level (The Bear Archery Cruzer has an IBO speed rating of 310 fps. IBO speed ratings assume a 350-grain arrow, which would put the KE at 101.2416 joules), possibly Street level (A compound bow shot an arrow through Level II body armor, which can take  .357 Magnum rounds)

Weaknesses: None notable | None notable | Compound bows tend to be heavier than recurve bows, plus they are fairly difficult to repair due to the higher number of complex moving parts.