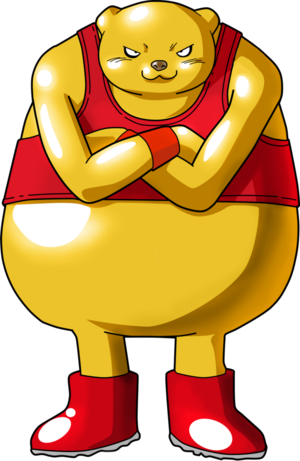 Botamo (ボタモ, Botamo) is one of the strongest Warriors from Universe 6 chosen by Champa and Vados for the God Tournament.

Powers and Abilities: Superhuman Physical Characteristics, Skilled in Martial Arts, Flight, Breath Attack, Ki Manipulation (Can be used defensively and offensively, to strengthen his skin or to fire ki blasts, which can home in on targets, and form defensive barriers), His slick body nullifies physical and energy attacks

Speed: Massively FTL+ (Was able to give Goku difficulty with dodging his attacks)

Durability: Universe level with his powers (Nullifies physical or energy based attacks)

Intelligence: Botamo is intelligent enough to pass the entrance exam into the tournament and is highly knowledgeable in combat.

Weaknesses: Overly reliant on his durability, Goku speculates that this caused Botamo to neglect his training.