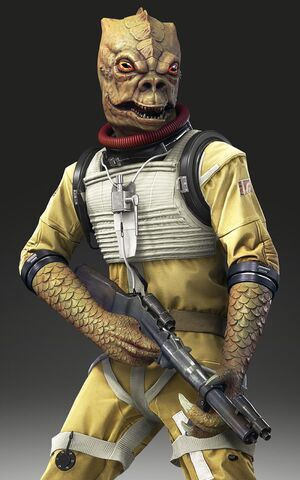 Bossk was a male Trandoshan bounty hunter who was active in the galaxy from the Clone Wars era and into the Imperial era. He possessed a fearsome reputation as both a slayer of Wookiees and as one of the deadliest bounty hunters in the galaxy; in the same league as the likes of Cad Bane, Aurra Sing, Boba Fett, Dengar, and IG-88. During the Clone Wars, he developed a close working relationship with the young Boba Fett and even helped mentor him and helped him manage his bounty hunters’ syndicate. During the imperial era, they would both go their separate ways but remained close friends and even had a friendly rivalry.

Powers and Abilities: Superhuman Physical Characteristics, masterful hand to hand combatant, skilled with all sorts of weapons (Such as blasters, grenades, grenade launchers, knives & daggers, etc), masterful pilot, Enhanced Senses (Has far greater sense of smell and eyesight compared to the typical human, can presumably see in the infrared as well)

Attack Potency: Small Building level physically (Large adult male Trandoshans of the kind that Bossk is can contend with adult male Wookiee warriors in hand to hand combat. One of the toughest Trandoshans in the galaxy, Bossk should scale to the likes of Black Krrsantan and Chewbacca). Small Building level with his Relbi-v10 (Being a heavy blaster rifle, its blaster bolts should be more powerful than those from standard blaster carbines and the micro-grenades which it fires are still more powerful)

Speed: Superhuman (Can fight off multiple Kage Warriors, each of whom possesses superhuman speed & agility far beyond that of even the swiftest and most agile humans, as noted by Seyn Marana)

Durability: Small Building level (Should be more than capable of taking some blows from the likes of Black Krrsantan and Chewbacca. Should be no less durable than the likes of Garazeb Orrelios and Alexsandr Kallus. The likes of K-2SO have described Trandoshans as being "fierce warriors" that are "very tough to kill", and Bossk is among the toughest Trandoshans in the galaxy)

Range: At least hundreds of metres with his Relby-v10 (being classified as a targeting rifle, it should be able to hit targets out to such distances at the very least).

Intelligence: Fairly High. Bossk is a highly lethal and cunning warrior on par with the likes of Boba Fett and Cad Bane. He is masterful in hand to hand combat and skilled with all sorts of weapons ranging from knives to sophisticated blasters. He is a skilled tracker and hunter and is even known to be a skilled hunter of Wookiees, a race known to produce powerful and extremely cunning warriors. He is also a masterful pilot whose flying skills are on par with some of the best starfighter pilots in the galaxy.