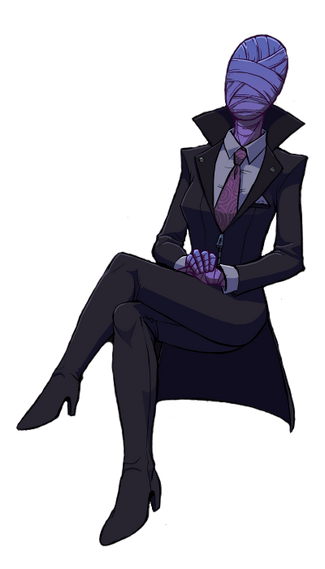 Boss Leader is the leading figure within the secretive Activity Consortium, a gathering of spectrals that track and deal with paranormal activity around the planet. She is single-handedly responsible for both the barrier around Mayview as well as maintaining the dream-hub of the Consortium. However, despite arguably being the most powerful character in the series, she tends to have a more flippant attitude towards those around her, playing with and teasing them without getting serious.

Tier: 9-A physically, 7-C with spectral energy | At least 7-C, likely much higher

Attack Potency: Small Building level physically (Should be superior to the likes of Richard Spender), Town level with spectral energy (Presumably created the barrier that surrounds Mayview, as it's stated she could "drop [it]". Said barrier can keep in spirits that tower over the forest surrounding the small town as well as The Shadow, which as described as "a nuclear bomb") | At least Town level, likely much higher (Created the entire Dream Hub of the activity consortium, which was barely explored by Spender. When speaking to Max, she conjured various open environments, although it is unknown if they were just illusions)

Speed: Subsonic (Comparable to Mr. Garcia, who reacted to Isaac's electrical attacks), Massively Hypersonic while in spirit trance (Is a state of heightened perception, where the world appears to be motionless around her. Spender could react to Isaac's Lightning within it)

Striking Strength: At least Small Building level (Should be superior to Spender) | Unknown

Durability: At least Small Building level (She should be comparable to the rest of the consortium, which includes Richard Spender.), Town level with forcefields | Unknown, likely Small Building level (Never shown to take a hit due to her state of being, although she shouldn't be less durable than before)

Stamina: Extremely High (Maintains links between the dreams of the Activity Consortium and their hub constantly, seemingly doesn't need to rest)

Intelligence: Very High (One of the leading figures in the spectral community, keeping tabs on the entire organization)

Weaknesses: Cocky, likes to play with her opponent

Retrieved from "https://vsbattles.fandom.com/wiki/Boss_Leader?oldid=5476353"
Community content is available under CC-BY-SA unless otherwise noted.