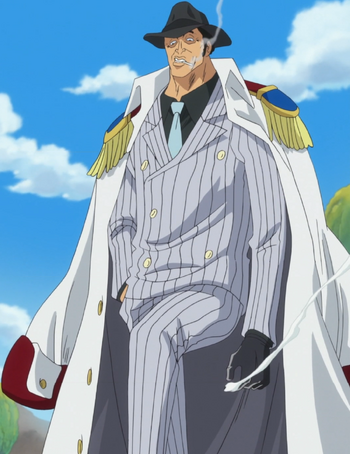 Real name Borsalino, Kizaru is the only pre-timeskip Admiral to have retained his position after the timeskip, after Akainu was promoted and Aokiji left. He has somewhat of an absentminded and out-there personality, committing such acts as mistaking his snail wiretap for his phone, and politely asking the pirates who just shot at him if they could help him find his acquaintance.

Befitting this, his Justice is "Unclear Justice", a purposely unspecified type of justice that allows him to simply do what is ordered of him.

He has eaten the Glint-Glint Fruit (Pika-Pika no Mi), which allows him to manipulate, create, and turn into the element of light. Several of his abilities include being able to fire laser beams and traveling at the speed of light.

Powers and Abilities: Superhuman Physical Characteristics, Very high-level swordsmanship (Matched Rayleigh blow for blow in a duel for an extended period of time), Enhanced Senses (Able to hear activity underwater, before the Whitebeard War began), Haki (Advanced Armament and Proficient Observation), Statistics Amplification (Can surround his body with an invisible armor to augment his defensive and offensive capabilities. He can also imbue physical objects with Busōshoku Haki), Light Manipulation (Ate the Pika Pika no Mi, a Logia-type Devil Fruit that allows him to create, control, and become light, in the elemental state it allows him to access his entire physical body genuinely becomes light and endows him with the ability to freely disperse and reform as well), Elemental Intangibility, Inorganic Physiology (Type 1. While he's turned into light), Regeneration (High, only in Logia form), Possibly Body Control (He should be capable of altering the size and shape of his logia-form to some degree, and manipulate his body's form to avoid attacks more easily), Weapon Creation (via Ama no Murakumo), Energy Projection (Can use his ability to enhance the speed of physical attacks, can fire laser-like beams, bolts or energy blasts with great destructive power or use intensely bright light to blind opponents), Danmaku (Via Yasakami no Magatama), Explosion Manipulation and Heat Manipulation (With beams), Transformation and Pseudo-Flight (Can use his ability to travel as light, does this through the Yata no Kagami technique, reflecting himself off of objects accordingly until he arrives at his desired destination), Resistance to Light Manipulation (All Logias are resistant to their respective elements)

Attack Potency: At least Mountain level+, possibly Large Mountain level (Fought against Marco, and should be comparable to his peers, Akainu and Aokiji), though his beams allow him to bypass durability to an extent via heat (capable of harming Whitebeard with his beams)

Speed: Relativistic+ Combat and Reaction speeds (Can match Marco in combat blow for blow), Speed of Light movement via light-dispersion (Capable of moving his own body at the speed of light) and attack speed (Can fire light beams and attacks at this speed)

Durability: At least Mountain level+, possibly Large Mountain level (Blocked a kick from Marco, and fought with him for an extended period) Logia Dispersion also makes him very hard to kill unless circumvented

Stamina: Very large, as he didn't show any strain or fatigue after battling for hours at the Marineford Battle. His former colleagues were also able to continuously battle one another for ten days.

Standard Equipment: As an Admiral, he has a Den-Den Mushi (telephone) on his wrist which he uses to communicate with other marine and World Government forces, or summon Buster Call.

Intelligence: Borsalino is accomplished and highly experienced combatant and very proficient in the use of his Devil Fruit ability, and has enough strategic ability to hold the rank of admiral, commanding many marine forces.

Weaknesses: Standard Devil Fruit users weaknesses. He must leave his light state to physically attack, he needs to create a mirror path (Yata no Kagami) in order to travel at lightspeed unless he travels in a straight path, and cannot change his course when traveling at that speed. 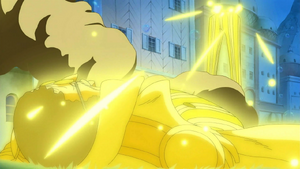 Finger Laser
Add a photo to this gallery

Borsalino as a child
Add a photo to this gallery