VS Battles Wiki
Register
Don't have an account?
Sign In
Advertisement
in: Characters, Tengen Toppa Gurren Lagann, Animals,
and 47 more 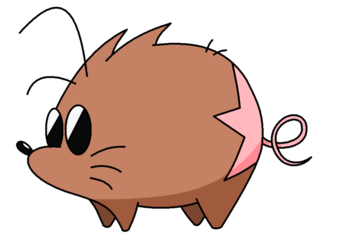 Boota (ブータ, Būta) is the pet pigmole of Simon, and his travel companion by the end of the series. Although Boota's appearance in the series was mainly for comic relief, he's shown several times that he is a great asset to Team Dai-Gurren.

Superhuman Physical Characteristics, Acrobatics, Will Empowerment, Supernatural Willpower (Kept increasing his Spiral Power for Super Galaxy Dai-Gurren, in order to match the draining, even though he was exhausted), Spiral Power, Energy Projection, Aura (Explosive), Forcefield Creation (Projected a large barrier of spiral energy which nullified The Anti-Spiral's energy shot), Reactive Evolution (Spiral Power is effectively the power of evolution itself, whether biological or cosmic. As a Spiral being is pushed further to their limits and retains their fighting spirit, they will inevitably grow increasingly stronger, and more capable of handling the threat before them), Technology Manipulation (Can control mecha via Spiral Power), Enhanced Senses (Can see the Anti-Spiral; a being stated to be invisible), Absorption (Absorbed Lordgenome's Spiral Power, and used it to evolve), Transformation, (Can evolve into a humanoid form), Awakened Power, Small Size (Type 1), Genius Intelligence, Underground Mobility, Resistance to Absorption (Can indefinitely increase his spiral energy with sheer willpower)

Same as before except Small Size (Type 1) and Transformation; Physical Combat, Non-Physical Interaction (Could disrupt the Anti-Spiral's physical manifestation)

Same as before, Transformation, Small Size (Type 1), Incorporeality, Abstract Existence (Type 1), Self-Sustenance (Types 1, 2 & 3), Regeneration (Low-Godly. His body had become a materialized thought, and can reform his body with just thought), Immortality (Type 3), Non-Physical Interaction (Can physically affect abstract beings and mecha), Acausality (Type 4. Scales to Post-Multiverse Labyrinth Simon, who has been stated to have broken through cause, effect and fate. It is said, that even when trapped, their feelings open the gate, and they will decide their own fate), Higher-Dimensional Existence (Can freely move within the Anti-Spiral's universe, which corresponds to a 10 + 1 dimensional reality), Resistance to Spatial Manipulation, Time Manipulation via powerscaling (Should scale to other Team Dai-Gurren members, who's powers are beyond time and space), Electricity Manipulation, Mind Manipulation (Managed to escape the Multiverse Labyrinth) [note 1]

Intelligence: Gifted (Knows how to encourage people, and has thus far never failed. Immediately learned how to talk and use his new body upon evolution. A prodigy in releasing Spiral Power; has used it to a higher extent than anyone else in Team Dai-Gurren the same day he first used it)