VS Battles Wiki
Register
Don't have an account?
Sign In
in: Characters, Male Characters, Armored Characters,
and 15 more 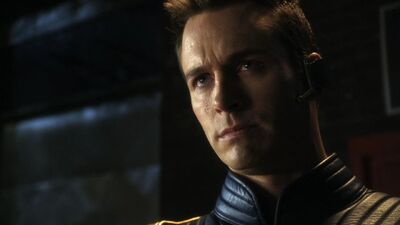 Michael Jon Carter was an football player from the 25th Century who gambled and threw matches. He was found out and kicked out of the sport. His life got destroyed, which caused him to steal a Legion Flight Ring, an advanced power armor, and his Artificial Intelligence Skeets. He arrived in the 21st Century and became the hero Booster Gold!

Attack Potency: Small Building level (Is able to fight against people comparable to him)

Durability: Small Building level (Survived being attacked by Yellow Lanterns comparable to the ones that fought Batman)

Weaknesses: He is arrogant and cocky