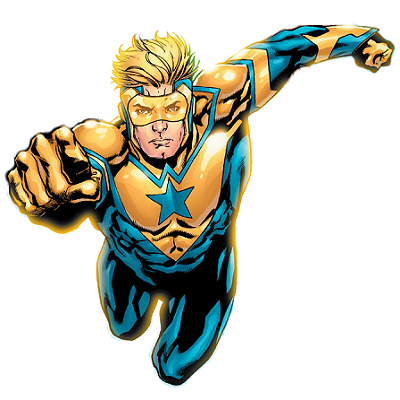 In the 25th century, Michael Jon Carter was a great quarterback football player in Gotham University until his father, who had vanished for most of his life (and previously run his family broke due to his gambling addiction) reappeared and convinced him to intentionally throw games for money. Expelled and disgraced upon discovery of this, Michael later worked at a space museum containing artifacts from the 20th century. This inspired him to steal some of the artifacts, time travel to the 20th century and become the superhero Booster Gold.

Attack Potency: Small Building level (Tossed Mammoth through concrete, threw a car several meters in the air hard enough to destroy it with one hand)

Lifting Strength: Class K (Has been able to lift airplanes)

Miles Morales (Spider-Man: Into the Spider-Verse) Miles' Profile (Both were in character and started 1.5 meters apart in an open field. Win condition was by death. Speed was equalized)