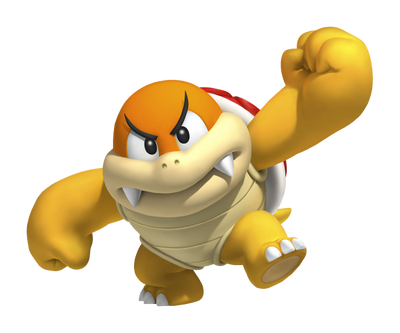 Boom Boom is a short-tempered brute who works for Bowser. He first appeared in Super Mario Bros. 3, and since his return in Super Mario 3D Land, he has been a recurring opponent for Mario and his friends.

Powers and Abilities: Superhuman Physical Characteristics, Acrobatics, Transformation (Can turn his arms into wings), Flight, Fire Manipulation (Can leave trails of fire when he spins), Invisibility, Duplication (Can make copies of his shell and kick them at the enemy), Afterimage Creation, Teleportation, Can spin in his shell

Weaknesses: Can go dizzy if he spins for too long